Did I KNOW THAT I married a DUMPSTER DIVER?
NO...not until last week, I didn't.
This is how I found out.

~~~~~
Once the notice became official, I knew the Pres and Luke would be in the store. The local Sears Hardware store was going out of business. Just think of what that means to a MAN!

Tools, nuts, bolts, pulleys, screws, bolts, small equipment, hardware galore, bolts, drawer dividers, racks, bolts and more bolts!! So all this past week...and I mean nearly each and every day...they made their daily trek to Sears. Some days, they "made out better" than other days. On Friday they came to the conclusion that it depends who is working at the registers because "the girl doesn't give a hoot what she charges so I'm getting stuff for next to nothing when she rings me out.  I got all this stuff for $10.00!"

Yet it was Tuesday night the Pres told me that if I could get a ride to and from Tai Chi it would be helpful because...

Luke was picking him up at 7 pm.

They were going "dumpster diving."
(swear to goodness that's what he said!)

Heading to Tai Chi, as I went out the front door that night, I leaned back into the house and said, "Honey, if you get arrested, don't call me.  I do not want to know you if you're in jail!"

Well, he didn't get arrested...thank goodness! He and Luke came home with their bargains  and shared their adventure with me.  The next day when, once again, Luke appeared on the doorstep first thing in the morning, and I asked where they were off to, I got...

"Honey, I got so many bolts, nuts and specialty screws, now I need something to put them in!"  (I am still laughing at that answer!)

And he did.  He came home with drawer organizers (three cabinets with six drawers each AND five wall hanging units with five drawers each).  Let me do the Math for you.  That's 43 NEW DRAWERS now located in the Pres' garage. 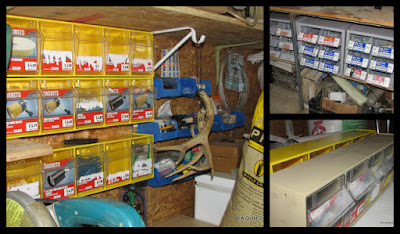 Working diligently organizing and sorting through all his shiny hardware, in a few days all of it was tucked away nicely in HONEY's NEW DRAWERS.

Sharing with Teresa at Eden Hills for her Friday Hunt for the week of February 12th because she was looking for:

1. Starts with G (garage because it is HIS FAVORITE!)
2. Week's Favorite (pulled pork...because it is MY FAVORITE!!)
3. In my kitchen (yum...pulled pork)
(sorry about the steam) 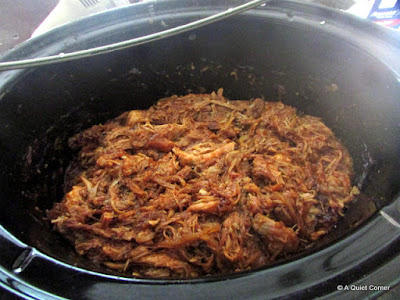 eileeninmd said…
Good morning, I had to laugh at your title. The Pres's garage will be filled up with all kinds of goodies. The pulled pork sounds yummy! Happy Friday, enjoy your weekend!
February 12, 2016 at 8:10 AM

Susie said…
LOL, I love your man's new drawers. I probably would have jumped in a dumpster in my youth but not now... That reminds of my friend Sherry. She was tending bar in our favorite place to eat dinner one evening. She asked some man would he get in the dumpster and find her pager...she worked dispatch at the police department and never knew when they might need her. Well this fellow Mike gets in the dumpster, finds her pager and when he comes back in the bar, he says, "And there ain't nothing good to eat in there either. !! I thought I would wee my pants laughing. Blessings for a fun valentine's day. xoxo,Susie
February 12, 2016 at 6:47 PM

Anonymous said…
Oh my goodness! Boys and their toys! I have an uncle who is 92 that I literally caught dumpster diving last summer. Couldn't believe it. Thanks so much for joining me for Friday's Hunt!
February 14, 2016 at 8:06 PM

Candy C. said…
Cute story! A hardware store going out of business would be a very big deal around here too! Pulled pork is definitely one of my favorites. :)
February 15, 2016 at 8:40 AM

Kristiina said…
A good, funny story and picture matching with it. Steam just adds domething to your picture.