Do you remember me talking about my Crown of Thorns houseplant...how it was so tall, leggy, spindly and lacking foliage?  Then I watched Martha Stewart "operate" on a woman's on her show, cutting the stalks, telling her to root the cuttings, then transplant them. 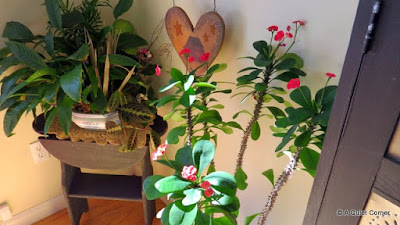 Well...here's living proof that Martha knew what she was talking about!

Can you see how tall it used to be?

Over the Summer, I cut the five stems and stuck the cuttings in sand.  Watering it regularly as it sat in a sunny, Eastern window, the cuttings soon began to flourish.

Before Summer ended, I placed the now well rooted cuttings into the original pot around the outer edges.  Look how gorgeous it is now! 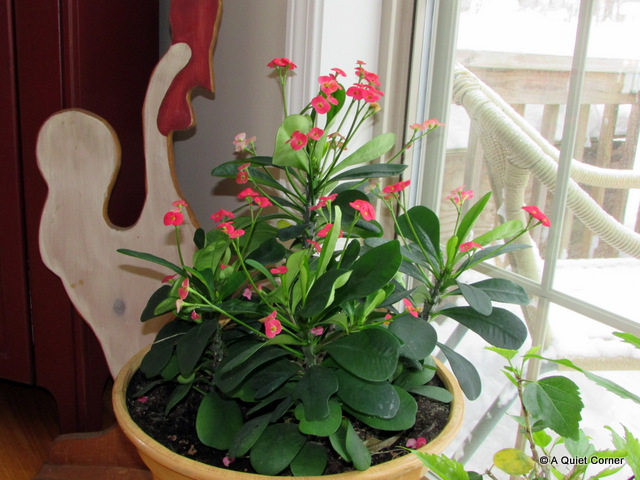 Over the Winter, I decided if it was good enough for my Crown of Thorns, I'd see what happens if I pinch "the old Hibiscus" that is kept inside.  Although it continued to bloom, it, too, was leggy and sparse. 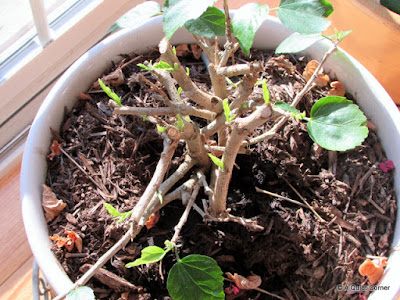 The Pres told me I was crazy but I did it anyway.


This pic was taken 1/21/16 and you can see how I slaughtered it.  However, I did not try to root what I snipped off because they really were not worth rooting.

Now this pic was taken 2/7/16 and look at the foliage emerging everywhere!

Now lets hope it has flowers. 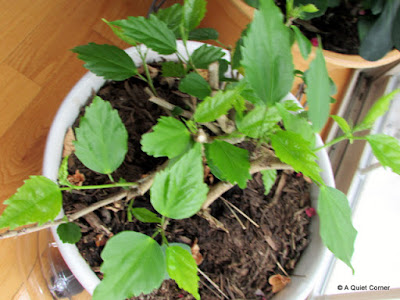 Sharing Just Pinch Me as well as this link you may find beneficial (Pinching, Pruning and Deadheading) with you and those at both

because Spring is in the air...:)
even though it was -8 Valentine's Day with wind chills making it 30 below!!

Susie said…
Looks like your plant is making a come back. Wonderful. I am just not so good with houseplants, although I love having them. Blessings for a great brand new week, xoxo,Susie
February 14, 2016 at 6:49 PM

~Kim at Golden Pines~ said…
It's lovely! I had a Crown of Thorns houseplant a couple of years ago, and I thought I was doing us both a favor when I said good-bye to it. Seeing yours has me rethinking that decision!
February 14, 2016 at 10:19 PM

Lorrie said…
It's amazing what pruning can do. But it's so hard for me to make those cuts. I feel sorry for the plant. I hope your hibiscus gives you lots of beautiful blooms!
February 15, 2016 at 1:43 AM

Ann said…
I no longer have any live plants in the house because I've managed to kill them all. If I had attempted what you did those plants would not have survived. Good for you for having a green thumb. They are looking fabulous
February 15, 2016 at 6:20 AM

MadSnapper said…
i did ot know that about the crown of thorns, but did about the hisbicus. i am betting it will work on other plants to... have you pinched my grandmother?
February 15, 2016 at 7:44 AM

Sallie (FullTime-Life) said…
It's going to come back beautifully! That plant is among quite a few that I used to grow as house plants (not as successfully as you do) but that grow outdoors now that we live in Southwest Florida. It still startles me to see them happily growing in people's yards.
February 15, 2016 at 5:37 PM

Inspired By June said…
Beautiful! There are just some plants that thrive when pruned! The trick is knowing which ones, lol. Your hibiscus should do well. How nice :)
February 17, 2016 at 7:33 PM

Roses, Lace and Brocante said…
Just look at that it looks like a brand new healthy plant!
Fingers crossed for flowers.
I wouldn't think of putting an Hibiscus inside in winter, but then we don't have central heating as our winters aren't cold enough to warrant that.
We just turn on the heating when we come home - some days we don't even need it and do with a blanket over the knees!
I see what I'm missing out on.
February 20, 2016 at 2:24 PM

My Little Home and Garden said…
Well, now! It looks like some heavy pruning made all the difference. I'm not familiar with the first plant, but I really like the little flowers it produces.
February 20, 2016 at 5:21 PM