My Valentine's Day WAS SPECIAL

It was like no other Valentine's Day since I've been with the Pres..and that's a long time!

Waking at 4:40 am, I made my coffee as always, turned on the local weather/news and got comfy on the couch.  Of course, while the coffee was brewing, I had peeked at the temp outside and saw -8.  Good thing it's nice and warm in here I thought taking my first sip.   Of course, the local weatherman was talking about the wind chills making that -8 feel like -30 and to stay inside.

Yep.  Warm, cozy, content and now cleaning up a few things in the kitchen, sudden'y the microwave beeped.  Uh-oh, power's out.  A minute later, it was back on.  A few minutes later, it was out.  This time it didn't come back on.  It was now 6:13 am.

Oh, it's Valentine's Day...let the man sleep, so I did.  An hour had passed and it was when my hands began getting chilled to the bone that I decided the heck with this Valentin'es Day stuff, I'm waking the old boy up!  So I did.

The grumbling, half naked man staggered out of the bedroom and into the bathroom dragging his clothes behind him like Linus.  Moments later he was out the door and around the back of the house to start the generator.

Hmmmm...I don't hear it, I thought, walking over to the kitchen window to see just what the Pres was doing out there.  There he was in his favorite, old cap and heavy flannel shirt, trying to get the darn thing started!! 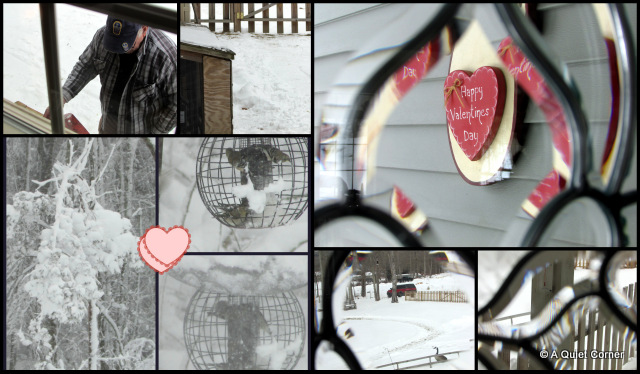 Apparently the generator decided it wasn't going to work...at all...no matter what...even though he'd brought his big, red Dodge Diesel out to "jump start" hoping that would do the trick.

Nope!  The wires and valves were frozen.  It took nearly an hour to get the ting to begin chugging and I mean chugging...spitting, coughing, skipping...whatever you call it.  The Pres came in to thaw out his hands which were now numb.  But that wasn't the worst.

After the generator started and he disconnected the cables, parked the truck back in the garage and came in, he said kept holding his chest, telling me his heart felt "funny."  Honey, I need more of a description than just "funny."

Later when we thought about it...it was the symptoms for hypothermia:

Sharing My Valentine's Day WAS SPECIAL,
along with a little info with you and those at
Mosaic Monday

eileeninmd said…
Hello, I hope the Pres is warmed up and feeling ok now! I am tired of this cold snowy weather we are having.. Time for spring! Take care and stay warm! Happy Monday, enjoy your new week!
February 15, 2016 at 11:08 AM

Susie said…
Oh I am send some warm hugs for you and the Pres. I thought sure when I saw the picture of your man on the ladder that he was messing with ice dams.. Thankful your sweetheart wasn't having a heart attack. Please take care of each other. Blessings to you both, xoxo,Susie
February 15, 2016 at 12:08 PM

Donna said…
Oh my that was scary with temps that cold. Here we had similar cold weather and actual temps on the 14th of -22F without the wind chills. I finally convinced my husband to wear a hat when he had to go out to take care of our neighbor's dog.

Donna@GardensEyeView
and LivingFromHappiness
February 15, 2016 at 12:17 PM

Mary Howell Cromer said…
We have no generator and when we lose power like in past ice storms, we simply freeze. We have a fireplace insert, but hardly ever use it as I am allergic to molds and mildews that can come in on the old logs. Even on a good day, they husband turns the heat down to 48 before going to bed and it is something that we have had words over in the past and I give up on. I dress in many layers and still my toes get Chilblains and I can only hope I survive each Winter once again as these bones grow older~
February 15, 2016 at 1:50 PM

Sandra said…
i can tell by the photo he was not dressed for negative temps at all. he is really blessed he did not end up in ER.. that would be scary. and when frozen like he was it is not good to get to warm to fast, or so i have read... i am glad he is ok. i figure he is, or you would have said he was not. i hope you never have another valentine day like that one...
February 15, 2016 at 2:05 PM

Ann said…
With wind chills that low he definitely needed some more layers. Why do things always pick the coldest day of the year to not work. Hope he felt better real quick
February 15, 2016 at 4:44 PM

Judith @ Lavender Cottage said…
Oh, that wasn't a nice day at all - hope the coffee got brewed at least. Our daughter who lives in the far north of Ontario said her car didn't start yesterday and it has every other winter. Guess it was a day for freezing your knickers and mechanical things not working.
Your poor hubby, hope he got warmed up and felt better.
February 15, 2016 at 7:34 PM

Gayle said…
Having a weather related job for many years, and being an ice fisherman, the RG is very conscious of his outdoor gear in all seasons. Me on the other hand; bare or stocking feet to the garbage can year round. (and I hear about it ;)
Glad it all turned out well.
February 15, 2016 at 8:11 PM

September Violets said…
I hope your husband is feeling better now and warmed up again. Not something to take lightly when you start to feel the effects of the cold. We had a very cold weekend here too, but it's warming up now (-10C today).
Wendy
February 15, 2016 at 9:41 PM

Stewart M said…
Wow - well thats not one you will forget in a hurry! We are more likely to have the power go off in the summer, when bush fires can damage the main lines.

Beatrice P. Boyd said…
Hope the Pres is feeling better and you as well, JP. How frustrating to have a generator and then have it freeze up due to the cold temps. We also had a very cold weekend here in NH and found out that one of our car batteries died, but luckily we were able to jump start with the other car and now are good for 6 years with a new one.
February 16, 2016 at 3:37 PM

Sally Wessely said…
Oh my goodness! That is really scary. I can just imagine the Pres being out there and concentrating on the job at hand and not thinking about how cold he might be. I actually got frostbite (very light care of it) on my hands in high school. To this day, my hands hurt when they get cold. I'm glad he came in when he did.
February 16, 2016 at 8:13 PM