Their activity has picked up a little during the month of February...especially the past week!  Last year, the nest was entirely freshened with pine sprigs by February 2nd. That wasn't the case this year, however. Fellow Eagle observers had told me perhaps it had to do with the mild Winter as they were not seeing much restoration at their nests either.  Our pair seems to be taking their sweet time when it comes to working on the nest. 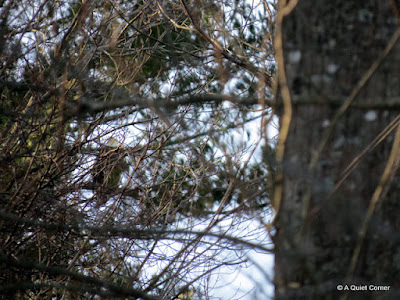 After seeing the pair more frequently (as well as hearing them more often), I began to feel hopeful they were interested in carrying on their "tradition" once again this year.

On Sunday, while outside in the morning with Moon and Copper, I spotted an adult perched in a pine not far from the tree line.  That was at 6:35 am. 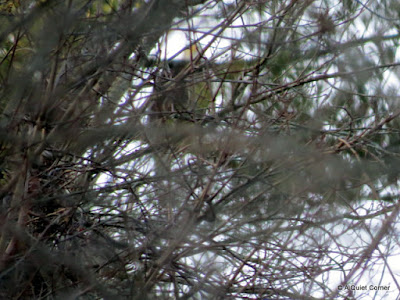 Moments later, I observed the mate fly in. Sitting together side by side, on the same branch, they seemed to be surveying their territory. They preened, looked to the left, then to the right with their backs facing me.

Shortly after I went in, when I walked over to the slider, I spotted them again. This time in a different pine, but side by side, on the same branch.

Spreading it's wings, the female flew North toward our house, circled wide over our side-yard riding the thermal, then headed back in the direction of the nesting pines. Moments later, her mate, mimicked a similar flight pattern. Circling over the tree line, it landed in a nearby pine, was there for an instant and then flew out carrying something.  It then flew in the direction of the nest. 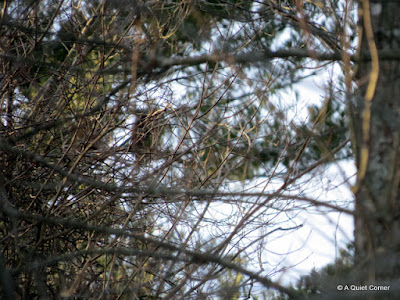 Four hours later, the female flew over our yard heading toward the river. Following her lead, the male then soared over the yard about 100' in the air heading NW.  That was at 10:47 am.

Sharing a few Serious  Observations with


They have been seen and heard daily and were back again this morning.  Yes, it is time for Serious Observations...

(and recording them in my journal because there's nothing more thrilling than seeing an Eagle fly while you're looking out the bathroom window!)

Did you know that:

when immatures (an Eagle < 5 yrs old) roost with mature Eagles, the matures perch higher in the tree?

before mating the pair spends more time side by side and within close proximity?

the female will let the male know when "she is ready"?

after a successful mating, the first egg is laid 5-10 days later?

if there is a second and/or a third egg, they are laid three days apart?

eileeninmd said…
Hello, great post and info on the Eagles. Happy Wednesday, enjoy your day!
February 24, 2016 at 7:18 AM

Susie said…
JP, I love that you get to see these wonderful birds. I love seeing it in the pines. I would love to see one here. Blessings to you, xoxo,Susie
February 24, 2016 at 12:18 PM

ifthethunderdontgetya™³²®© said…
I'd love to look out my window and see an eagle! Thanks for sharing your experience.

E. Beth. said…
i know what you mean... i understand it would be a totally different kind of journaling (is that even a word? google doesn't like it??!) but i always think i need to write about my life, a grateful journal too, but i don't keep up with it, & it always falls by the wayside. i even have a 5 yr journal that does ask me ?'s but i keep forgetting that, i enjoy looking back at what i said last year & all that jazz. my grandfather would do it every morning, but some silly person threw them away and i never got the chance to read them to see if i wanted to keep them, why does every one else always get the option before me, nuts!! good luck with yours. ( :
February 24, 2016 at 7:09 PM

Lisa @ Two Bears Farm said…
Yup. I would probably be so excited if I saw one out the bathroom window I might fall off the toilet.
February 24, 2016 at 9:35 PM