Although I haven't gotten to responding to all the comments recently, I promise I will as well as getting around to visit everyone.  However, first and most important was my sleepover and day spent with my youngest grand daughter, Mia.

The Pres and I picked up the NEW car Wednesday, it had 17 miles on it by the time we got home from the dealership.  So when I hit the road the following day, it was referred to as "the maiden voyage".  Thanks to that little excursion, I now have a whopping 144 miles on it! 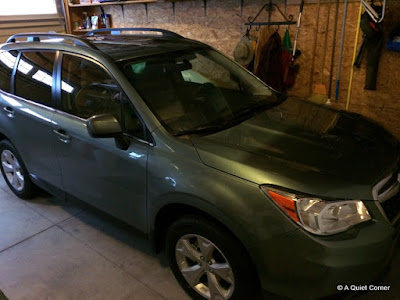 This was taken before I left that morning so it was clean...just about spotless, in fact.

Okay, lets forget the car and move on to...

the time with Mia.
We (my son, DIL and Mia) watched a movie the night I arrived and hit the sheets early.   The next morning, when they left for work and after we cleaned up from breakfast...we had fun!

I was told I was "the older sister who lives in Florida and doesn't get to see the kids a lot."  By kids, I mean the five...yes, FIVE...baby dolls.

I had three my entire stay.  Three who I carried and hauled everywhere...one of which "drank too much apple juice and had loose poops so you can't leave her unattended because...well...just in case."

Mia decided we (all of us...her, me, the five kids and the two dogs) were going camping.
"Where are we going?", I asked.
"Maine," was the answer.
"How are we getting there?" I asked.
"We're walking.  Wait let me get my backpack because you always have to be prepared when you go camping," she stated emphatically as she ran down to her room.

Apparently being a Brownie is a good thing.

It was then I saw her stuffing the most unusual items in her old, large, well-worn backpack.
Blankets, a pretend sleeping bag, a toilet (yep..a small doll's toilet), a small dolls' vanity, and walkie talkies ("You do know how to use these things, right, Nana?") all got shoved into a backpack that was then put on over her little seven year old shoulders.

But wait, it gets better, folks.

When we "arrived" I was told to go look for food in the woods.  When I returned from "the woods", I was told "that the brown spots on the mushrooms I was about to eat were not dirt.  The brown spots were rabbit poop so...are you sure you want to eat them?"

Then it was time to pack-up our camp and head to our next destination.
Aruba...LOL!
"And now we're on a big boat in the sea.  Do you feel the boat rolling back and forth, Nana?"
You laugh but as she and I walked carrying those five little babies, our camping gear, the tent, and bags full of stuff down the hallway in her house, I swear I began to feel seasick!!
(You see, she knows that Nana does NOT...I repeat does NOT...do well on boats in the ocean.) 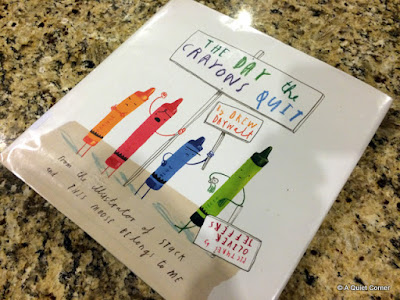 When we "got back home" and put everything away, she read me her latest library book.  THE most adorable book ever!  In fact, she's getting the sequel the next time she goes to library.  She loves to read and when she reads, she gives it her "all".

I leave you with those.

Remember "Love" comes in all sizes. 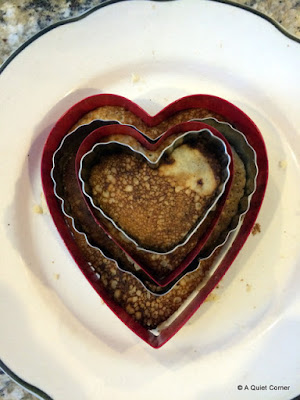 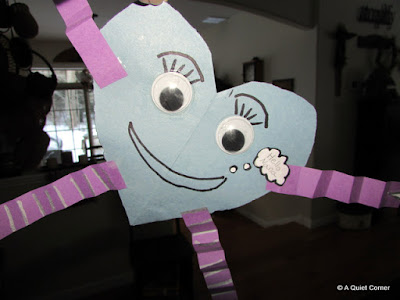 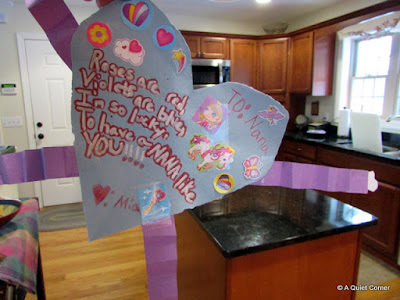 Sharing The Good Stuff with you and those at

eileeninmd said…
Good morning, sounds like a fun adventure with your granddaughter. It is great to have a great imagination. I get a little seasick too. I love the drawings. Happy Valentine's Day! Happy Sunday, enjoy your new week!
February 14, 2016 at 8:07 AM

MadSnapper said…
you have the sweetest and most imaginative valentine ever... this is such a great story. now i want to read about the day the crayons quit.
February 14, 2016 at 8:14 AM

Susie said…
JP, That sounds like the best journey ever. I miss that kind of little kid fun with my grandkids. My youngest is going to be 12 soon. Kind of breaks my heart....to not have sweet pretenders around. Blessings to you, Hope you have a great fun valentine's day. xoxo,Susie
February 14, 2016 at 9:46 AM

Gemma Wiseman said…
Loved all the twists and turns in this story. What a grand day. Grandchildren certainly know how to spark a grandparent's sense of adventure. And love the creative valentines.
February 20, 2016 at 2:34 PM