It began with a walk into the woods.
Securing my old, well-worn yet reliable folding stool over my shoulder and carrying zoomer in one hand, I pressed the binoculars against my chest to prevent them from being an annoyance as I stepped over downed limbs and debris.

I have been sitting in the woods a lot.  Watching and waiting.  Seeing and believing but no longer sitting at the edge of the clearing, I have secured a new spot in the woods to observe the Eagles. For now, since there are no leaves to obstruct my view, it makes it easier to see the trees across from the nest clearly. It also affords me a perfect view of the adults as they fly in and out of the nest during the incubation period of 35 days.

So I sat and waited.

Then the early morning silence was broken by the sudden twittering, soon to be followed by two squawks coming from the nest.  Looking in the direction of the nest and hearing more assertive twittering, I spotted the cause.  A Red-Tail Hawk had landed on top of the dead pine directly across from the nest. However, the squawking and twittering apparently urged the hawk to move on because it wasn't there long. 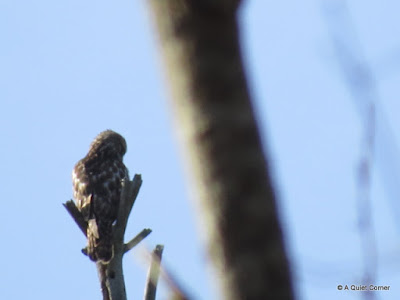 The other adult Bald Eagle flew in from the NE, immediately heading to the nest to take its turn with incubation duties causing the mate to exit the nest. Landing in the dead pine, it gave me a clear shot. I took several and upon reviewing the photos, I couldn't wait to share them with DEEP as part of my weekly observation report. 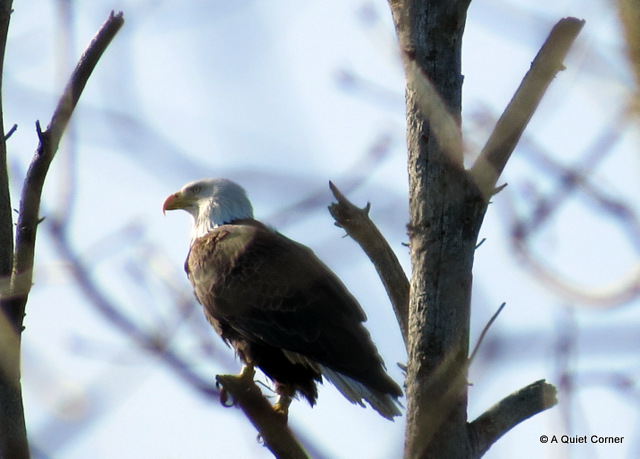 It was BANDED!
After four years..FOUR YEARS...I now have photos proving that this pair is BANDED because the following morning, I once again headed into the woods.  This sighting was even more exciting because as one adult flew into the nest vicinity, it landed on the lower branches of the dead pine.  Meanwhile, when the mate exited the nest, it perched at the tippy top of the tree! 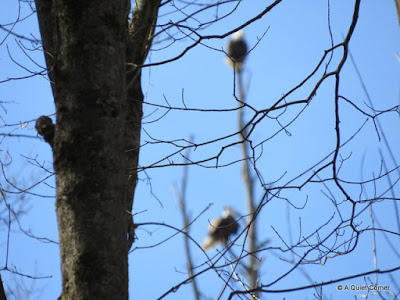 Knowing I would rely on the experts for help, now my observations needed some clarification. 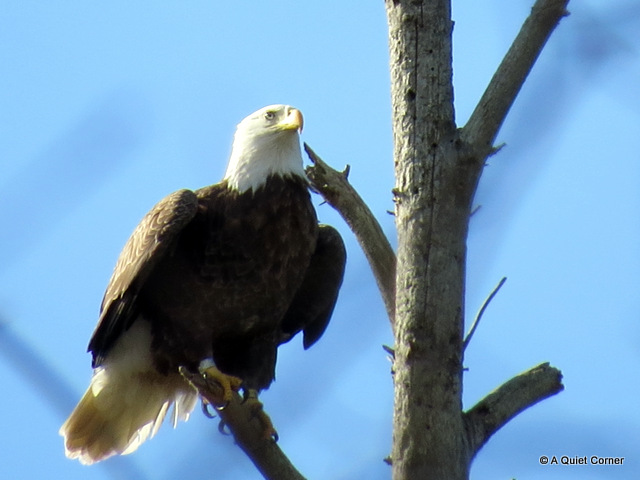 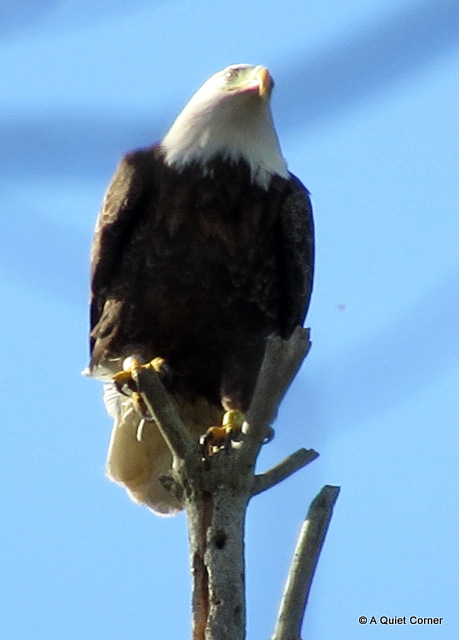 Remember, if you see a BANDED bird, get a photo and report it to your local Wildlife Division.
It matters.
Please refer to the following link for additional information.

Eagle Band Colors
"... These eagle banders rely on YOU, the bird-watching public, to spot and report sightings of banded eagles. These sightings are used in eagle research to track eagle movements, monitor survival rates, and causes of mortality...."

eileeninmd said…
Hello JP, awesome shots of the Eagles. It is great you can see the band. Happy Tuesday, enjoy your week ahead!
March 15, 2016 at 3:25 PM

Ann said…
Awesome shots. This may be a silly question but, you can see that it's banded but how can they tell one banded bird from another? I'm assuming the band is marked somehow but unless you are close enough to read the markings how would you know
March 15, 2016 at 4:30 PM

Susie said…
JP , What a beautiful sight. I would so love to see that. Thanks for sharing these pictures. Blessings, xoxo,Susie
March 15, 2016 at 4:44 PM

Pamela Gordon said…
Wow. Great photos and exciting that they are banded eagles. I hope you can get some pics of the young when they are old enough to leave.
March 15, 2016 at 4:56 PM

Pauline said…
Just looking at your photos I got that overwhelming feeling of awe I had on the few occasions I saw those magnificent birds (while visiting Canada years ago). I love birds but the eagles are in a class of their own. I hope they successfully hatch their young.
March 15, 2016 at 5:21 PM

Sandi said…
I had no idea there are so many banded birds out there!

Sally Wessely said…
That is awesome that you have proof of banding. Good job.

Blondie's Journal said…
Your shots are outstanding. I remember when I first started following you, you had the most extraordinary pictures of eagles. And your knowledge of these majestic birds and the hawks as well, is so, so interesting. Never knew to report a banded bird. We do have many hawks and eagles at the lake. But I only see them waaaaaay up in the sky. Still...very exciting!

AppleApricot Wen said…
Wow, beautiful post and great photos! We don't have these eagles where I live, it must be such a spectacular sight seeing them!
March 16, 2016 at 6:15 AM

eileeninmd said…
Hello, JP! Great Eagle post. I just wanted to stop back and say thanks for linking up and sharing your post. Enjoy your day!
March 17, 2016 at 5:42 AM

Anni said…
"The breaking of the early morning silence"...........I can picture this. What a wonderful day you took us on. I really appreciate you sharing. This was exceptional, and I'm sure other birders at I'd Rather B Birdin' agree.
March 17, 2016 at 2:56 PM

Stewart M said…
Good to see these eagles are being looked after!

Beatrice P. Boyd said…
I have been watching the video cams on the nesting Eagles near Washington, DC, but your sightings are way more impressive, JP. Thanks for the info on banding too.
March 23, 2016 at 10:09 PM

Breathtaking said…
Hello JP!:) How exciting to witness these banded eagles. What great captures! Now you can observe this pair of magnificent Bald Eagle's from a better view point, and perhaps later share pictures of the chicks.Hope so!!!:)
May 4, 2016 at 4:15 AM