When I received the issue of Connecticut Wildlife and the upcoming schedule of events, I jotted down 2/2716@1:30 pm as "reserved" in my calendar.  But it didn't end there.  Several days before, I reminded the Pres he had to be around Saturday to care for the dogs.  This was something I didn't want to miss.

A presentation by CT DEEP (Department of Energy and Environmental Protection) on Bald Eagles was to be held in Western CT and the speaker was none other than the man I send my weekly reports to...a man I wanted to meet.  It would be worth the 80 minute drive...I had to go.  I just had to meet the man I email weekly so I could "pick his brain"! 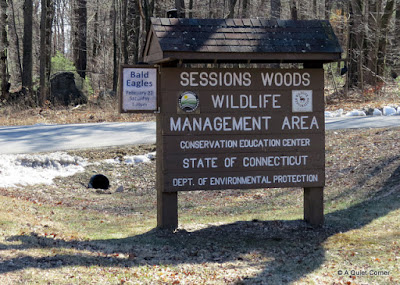 Intending to arrive extra early, I was dressed and ready an hour before my scheduled departure. That was a good thing because as I sat in the DR and signed on to the laptop, I noticed the pair of Eagles I monitor around the pines on the tree-line. Snapping a few pix, I shut the camera off, put the lens cover on and said good-bye to the Pres.   Taking zoomer rather than the smaller camera with me, I wanted to show Brian the pix I'd gotten that morning.

Leaving early was a good thing because I got a tad lost.  Unfamiliar with exactly where I was going, I tried using the Map app on my phone with the new car.  Although I couldn't get it to play through the speakers, at least I was able to get where I needed and wanted to be even if it was later than I expected.  Not only did I want to meet Brian face to face, but also knew the scheduled session would be a learning for me.

Although I didn't know it, upon arriving I discovered that Mary Beth, the owner of "Horizon Wings, Raptor Rehabilitation and Education" along with a few of her "employees" were making a guest appearance.  Both she and all her employees are all wonderful and so knowledgeable and never fail to teach me something!! 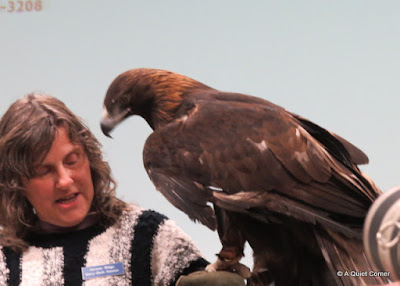 As Mary Beth, spoke to the crowded room about Chrysos, the Golden Eagle..."the King of Birds and the bird of Kings", you could clearly see the strength and power this raptor has.

The golden eagle (Aquila Chrysaetos) is a member of the Booted or True Eagles family. Golden eagles can be found throughout much of the northern hemisphere. It lives in mountainous areas, prairie coulees, and other places where rugged terrain creates abundant updrafts. Size - Length of about 3 feet (.92m). Weighing up to 15 pounds (7kg), with a wing span of up to 7 feet (2m). 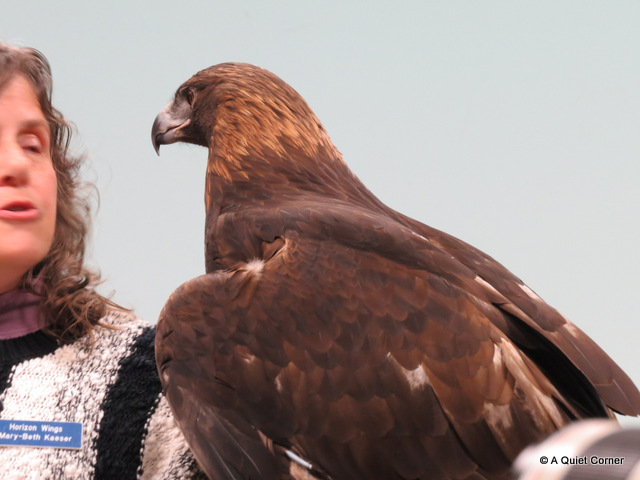 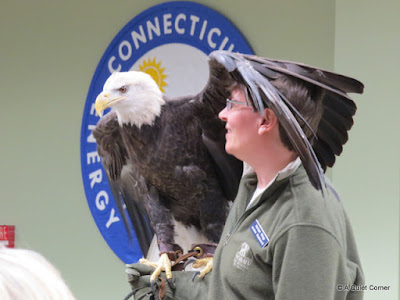 Then we met Atka, the young American Bald Eagle, who came to them several years ago also.

Both Eagles had been injured and are unable to return to their natural environment.  Thus, they are among several birds that are now have become "educational ambassadors."

Atka has just "matured" and now has the distinct white head and tail along with the golden beak and eye.  He is HUGE, although "small" for his age. 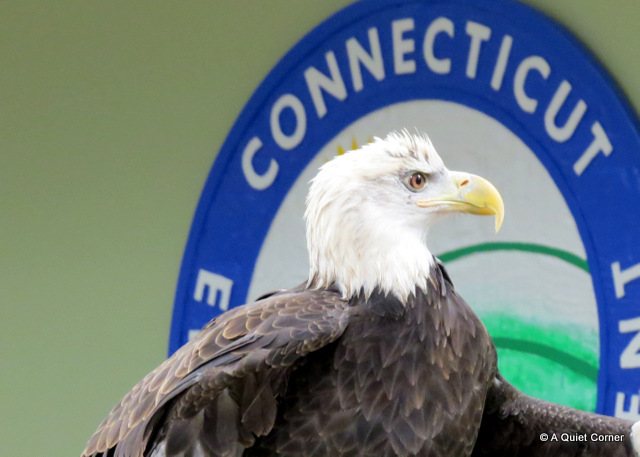 During the presentation, I noticed that both raptors appeared to be sweating.  Watching them, I wondered why.  Then it suddenly dawned on me.  They are kept outside.   The ride was a long one and now here they were at "head of the class."

Both Mary Beth and the other handler spoke softly to them as they sat gripping their gloved arms which were resting on strong and sturdy canes to help support the weight of the birds. 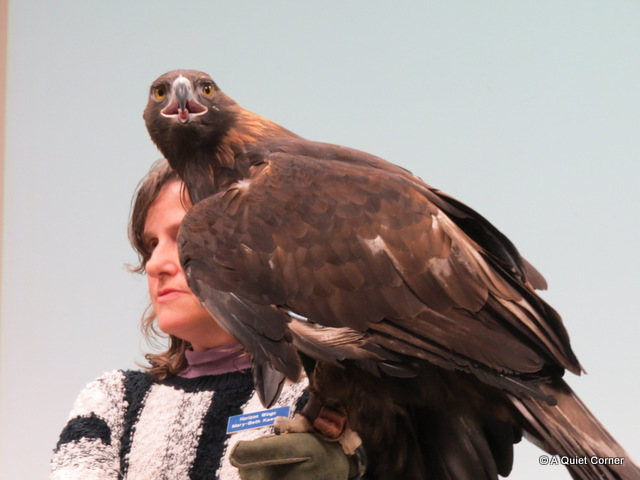 Introducing myself to Brian before the presentation, we had time to exchange a few tidbits of information about the pair I monitor and their recent behavior.  A week has passed.  There have been noticeable differences in their behavior.  My observations, and hence, my notes, have changed.  Rather than seeing the pair together, sitting side by side on the thick pine branch or in close proximity of each other, I am seeing ONE LONE ADULT sitting in the pine.  Sometimes, it is the male.  Sometimes it is the female.

I believe they are on eggs! 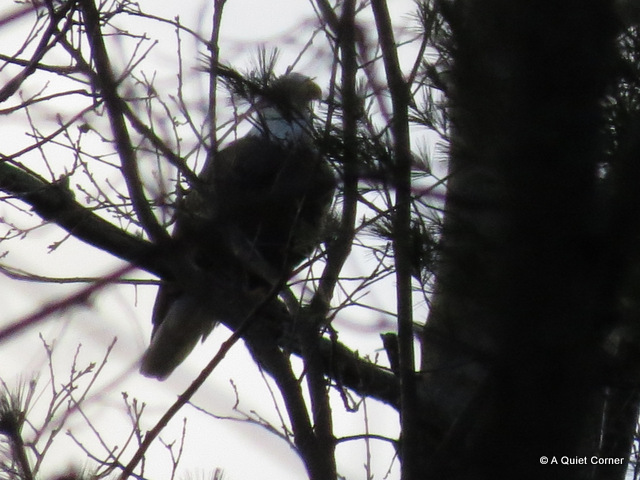 Karen thisoldhouse2.com said…
They are magnificent, aren't they?

Ann said…
I've never seen a Golden Eagle before. Both of them are very impressive. Sounds like an exciting day for you
March 7, 2016 at 9:20 AM

eileeninmd said…
Hello, sounds like an awesom presentation. The Golden Eagle is beautiful. I would love to see one in the wild. Great news on the Eagle eggs. Happy Monday, enjoy your new week!
March 7, 2016 at 9:55 AM

Lisa @ Two Bears Farm said…
We went to a private raptor program at the science museum last year and it was fascinating. Those birds are so gorgeous!
March 7, 2016 at 1:00 PM

eileeninmd said…
Hello, JP! I was sure I left a comment on this post. Maybe it has not been published yet. This presentation sounds wonderful. I love the Golden Eagle. Great news about the eggs. I hope you will be keeping us updated. Thank you for linking up your post. Happy Monday, enjoy your new week!
March 7, 2016 at 2:34 PM

Susie said…
Wow, how wonderful...to see those eagles and enjoy the talk. Plus seeing the ones at your own property. Blessings, xoxo,Susie
March 7, 2016 at 3:22 PM

Mimsie said…
What a wonderful experience you had even if it meant a long drive.
Those eagles are magnificent. We only see eagles if we venture southwards in our state but in the metropolitan area hawks are quite often seen. All beautiful creatures.

Beatrice P. Boyd said…
Although they are raptors, these are such beautiful and majestic birds.
March 8, 2016 at 9:22 AM

Pamela Gordon said…
Exciting to see such beautiful birds so close up! I hope the nesting eagles are successful with their brood.
March 8, 2016 at 11:55 AM

Powell River Books said…
Eagles are such majestic birds. We have them around our float cabin home, and one landed right out front. - Margy
March 9, 2016 at 9:09 PM

Stewart M said…
Seeing birds like this close up is a real privilege.

Thanks for adding your post to the linking this week at I'd Rather B Birdin'. I didn't have computer for some time off and on because of storms, so this is my first chance to get over here to visit with you.
March 10, 2016 at 4:00 PM