A Busy Week Filled With Questions

Sure April 22nd was officially Earth Day. However, here in my neck of the woods, it had to be rescheduled to Tuesday. Here's why....

Monday, I drove over to spend the day with my granddaughter, Mia. What a riot that was! My son and his wife had told her "no toys...Nana is not buying any toys today when you go out." But it was after her folks left for work that she said, "So, Nana, I was thinking. When we go out later, maybe we could shop for accessories." We did and she came home with a cute little bracelet she'd picked out that was a BFF bracelet. Half would go to her friend and half to her. All in all we had a great day, although when we got back to her house, she suggested that I take lessons in how to operate remote controls for TVs...LOL!! Do you think that is because I rarely get to use the one we have here?

Tuesday I picked up after the slobs that litter. Hoisting the nearly full green garbage bag over my left shoulder, I trudged toward our gravel road knowing that at least one of the remaining two would soon be just as heavy. But then that shiny dark green pickup truck drove by again. This time he stopped as he pulled up right next to me and said, "I just had to come and meet the Good Samaritan would I see doing this each year." A short time later, he drove off with the heavy green trash bag that he'd placed in the bed of his truck. You see he told me that the least he could do was get rid of the trash for me.
Has that ever happened to you? 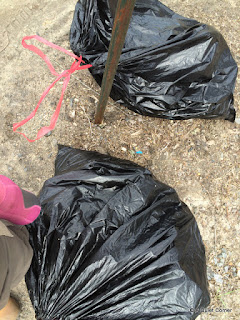 Wednesday was the gym in the morning. Then that night I drove 1 1/2 hrs to attend a get together with my former colleagues. It was so great to see everyone again. One major faux pas though. There I stood in the bar chatting with a gal who I thought was "Debbie." However, when I walked about her husband, Jack, she looked at me and said her husband who she divorced was not Jack! Holy crap, was I embarrassed!! She wasn't Debbie.   She was Brenda!
Has that ever happened to you?

Thursday was housework and Tai Chi because Friday had me attending a presentation on Eagles and I was finally going to meet a fellow Eagle monitor from Massachusetts!! He is so knowledgeable and often shares great information with me so I have the utmost respect and admiration for him and his endeavors. He has set up his own monitoring system recording the nest activity periodically throughout the day with these huge lens and recording equipment which he then plays back on his laptop. It was so wonderful to finally meet him face to face!!! I felt like I've known him for years.
Has that ever happened to you? 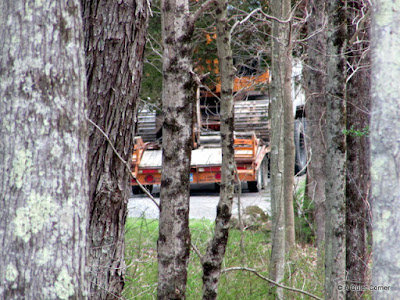 Then on Saturday and Sunday, our BFF, Luke, brought over the backhoe and a bobcat to pull the 21 tree stumps (left from the trees we removed for solar, remember?)!! Holy aching bodies!!! 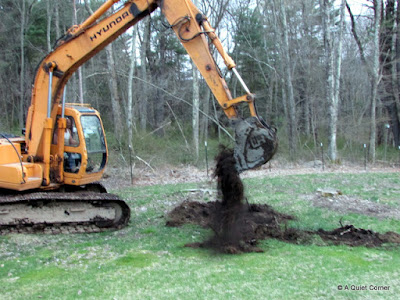 Pulling roots a little each day because the Pres developed bronchitis, I got sore...downright sore!  Meanwhile when the work began, he said he was catching a cold. That was last Saturday.  Four days later, he went to the doctor to get checked because he had a wicked sore throat. Diagnosed with bronchitis, he now has a scrip and the nastiest sounding cough you can imagine!!  Has THAT ever happened to you?  Who knew that you could develop bronchitis so quickly??? 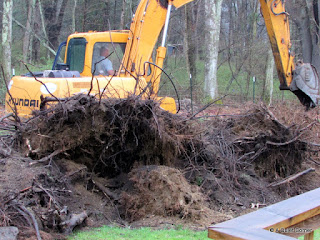 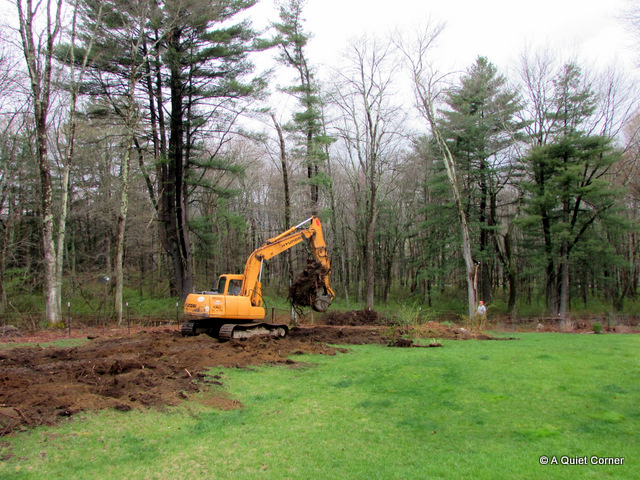 As you can imagine, the next step was to grade.  A few days later, once the Pres was feeling better, he drove the ATV to spread grass seed and fertilizer.  So here we sit, waiting for rain wondering if it will come.  Meanwhile, I asked the Pres to save all the tree stumps and just pile them up in the woods down below.  The critters will love them!

eileeninmd said…
Hello, sounds like you have a busy but fun week. Your granddaughter sounds like a real sweetie. Happy Monday, enjoy your new week!
May 2, 2016 at 9:23 AM

Sandra said…
i enjoyed all your things that happened to you and no, none of them have ever happened to me, but i did get a sore throat a few times, but not from digging and pulling roots. have never had bronchitis but my first husband had it all the time, many times and so does my oldest son..
May 2, 2016 at 12:01 PM

Pamela Gordon said…
One can't help but notice all the garbage strewn along the roadsides this time of year. I try to keep some picked up along our stretch of road when I walk but some people are just so ignorant and toss their Tim Horton cups and fast food wrappers out their car windows without a care in the world. It is maddening. I hope your husband is feeling better soon. You've been busy with the stump removal etc. Good to get all these chores done. Have a good week.
May 2, 2016 at 2:05 PM

Linda said…
I get a real kick out of reading your blog, JP❣I went to my 50th HS class reunion on Saturday and was happy that we had name tags with our photos from 1966. Otherwise I would have chatted with no one😜Linda@Wetcreek Blog

Rambling Woods said…
Wow, lots going on! My daughter, husband and baby all have bronchitis and it hit them all at the same time. Poor baby is on a nebulizer so the Prez needs to take it easy ...feel better...Michelle
May 2, 2016 at 4:59 PM

Mimsie said…
I feel weary just reading about all the things that you did during your week.
So sorry about the bronchitis. My hubby used to have dreadful bouts of it when he was younger but once he stopped smoking he was fine although now (at 86) he has a touch of emphysema but not badly.
I hope you are now resting after all your hard work.
May 3, 2016 at 6:43 AM

betty-NZ said…
Sounds like an interesting week! I don't usually use name when speaking to people I don't know very well simply because I don't want to be wrong!
May 4, 2016 at 6:58 AM