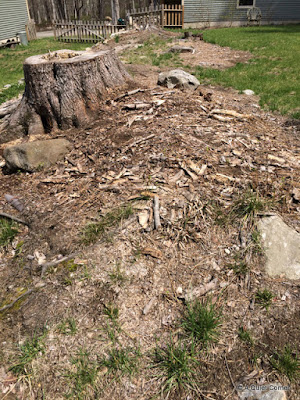 You do remember what the yard looked like with all the stumps left from the trees cut down last Fall right?

Well, as you can imagine,both the Pres and I began to grow tired of looking at the devastation all Winter and once the onset of Spring began, we grew even more anxious.

Then our BFF, Luke, called one evening telling us he'd be by that weekend.   And there he was...the very next morning.

Now I will say that although we always enjoy his company, his appearance was like "the knight in shining armor" that day!


As you know, he came by with the backhoe did this. 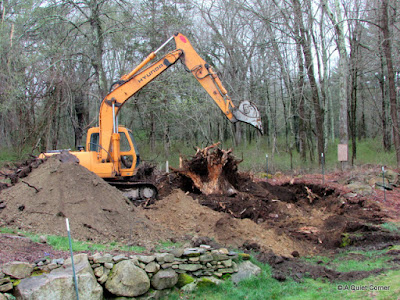 So then a week ago, we did this:

Late one afternoon, more than a few bales of hay were spread over the seeded loam and it was my job to wet it down because "we're expecting wind before the rain comes in so it's your job to wet it down thoroughly to prevent it from exposing the seed."

So after a workout at the gym that morning, vacuuming and pulling more damn darn roots and picking up more rocks, I dragged the hose and began watering like the man said.

When it was done, I was exhausted and couldn't wait to hit the shower and put my jammies on.  And I will say that rolling up a 75' hose filled with water takes a lot of cranking! 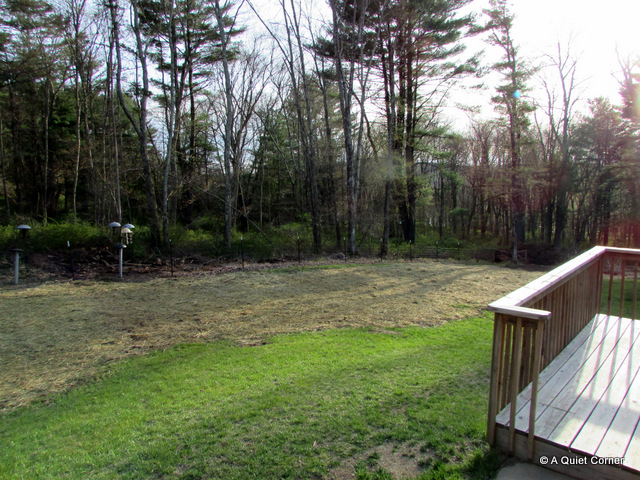 The next day when I looked out to see if the hay was still in place, I saw that it hadn't budged.  Thinking that I did a good job at wetting it down and expecting a little recognition, I said to the Pres, "Boy, Honey, I must have done a good job because the hay didn't budge."

The Pres, with his short, simple, poignant response said, "Hon, the wind never blew and it poured last night."


Does anyone know if that's true?????  Better still, does anyone remember that little poem?
Regardless, the grass that germinates because of it will be the BEST!
Email Post
Labels: Family Friends Health-Wellness Home Improvements Rural America Teamwork Yard Work

eileeninmd said…
Oh my, all your watering and then it rained. It does look nice, it will be beautiful when the grass has grown. Happy Tuesday, enjoy your week ahead!
May 10, 2016 at 7:24 AM

Linda said…
We appreciate you for your hard work and that you always "tell it like it is." Now sit back and watch the grass grow❤️Linda@Wetcreek Blog
May 10, 2016 at 9:09 AM

Susie said…
LOL...I had to laugh. Bless your heart. Well let's just say you got some help from above and hopefully the grass will be awesome. That does look like a lot of work. Blessings, xoxo, Susie
May 10, 2016 at 9:43 AM

MadSnapper said…
have not heard the ditty and would think pigs dont eat it because they hog everything down without chewing... don't know that though. i sent you a dozen pats on the back for all your hard work... he he he on the rain and no wind. leave it to the men in our lives.
May 10, 2016 at 11:51 AM

Ann said…
Oh isn't that just typical. Now you know if you hadn't gotten it done the wind would have blown like crazy.
I never heard that little poem but we used to say the first line all the time
May 10, 2016 at 3:16 PM

Ah, Mother Nature! She always has something up her sleeve!