Heading into the woods at 5:47 am, I was anticipating the peace, quiet and solitude that I enjoy so much while observing the Eagles. So, when I opened up my three legged folding stool and placed it gently on the ground, I knew that it would give me much comfort even though it is only a canvas seat. Taking my journal and pen out of my pocket, I leaned around the trees to take a peek. All was quiet. So, laying my gloves and cell nearby, I readied "zoomer" and the binoculars.

Hearing the Eagle's alert coming from the nest shortly after I arrived made me lean once again to take a peek. I immediately spotted the hawk that had landed in the dead pine across from their nest. It sat a few minutes as if to taunt the Eagle, then went on it's way...perhaps intimidated by the shrieks coming from the adult. 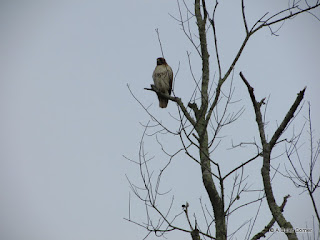 Now that things around me quieted down, I could take in the early morning activity as I watched the sun come up. A half hour had passed. Birds tweeted while the squirrels scurried over the dry, fallen leaves on the forest floor and then the turkeys began to gobble. They sounded so far in the distance yet I could tell that they were on the move and heading in my direction. They scratched, pecked and gobbled making their way through the woods.

Suddenly, the Japanese Barberry about 20 ft away to my left began to move. In an instant, the sound of beating wings was upon me...really close as I watched a huge turkey fly right by me. It was so close that when I turned quickly, the three legged stool twisted too!

Yep, on the ground with camera dangling from my neck.  Turning to see where the damn bird it went, I took aim with zoomer.  (As you can see, the first few came out one big blur but I got steadier after I decided to just stay on the ground!!) 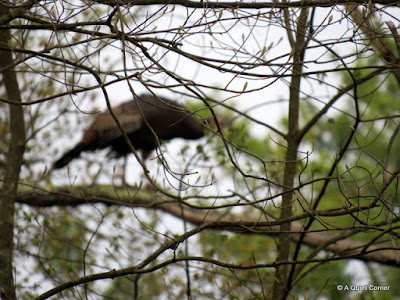 Now preoccupied by the turkey, I turned back in the direction of the Eagles. While my back was turned, one of the adults had landed in the dead pine about 125 yards away. 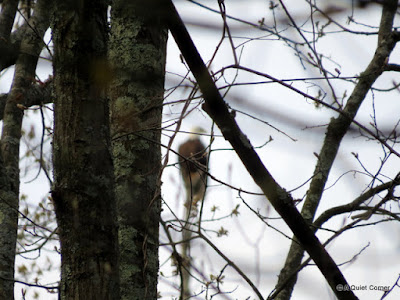 Without notice, the Eagle flew in my direction, circling and double backed to perch in the pine. It scared the turkey though because it headed for cover. 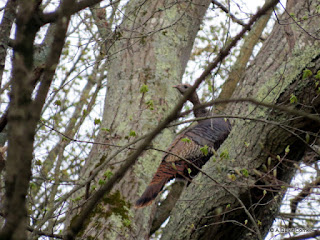 The poor thing looked so scared!!!

It actually buried it's head between the branches. 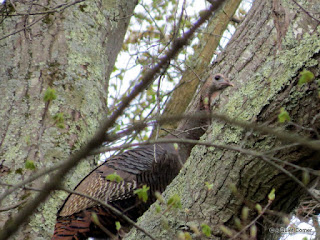 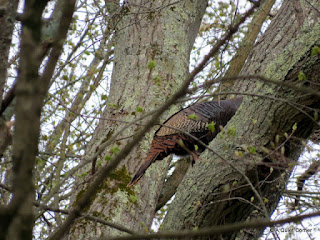 Since the Eagles do that occasionally when I watch them, I am convinced they do it to let me know that they know that I am there.  And since I was on the ground anyway, I thought I might as well see if I could get a pic of a buzzing eagle. 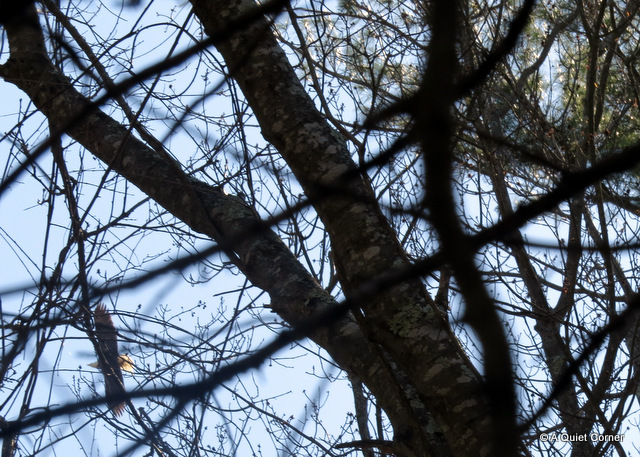 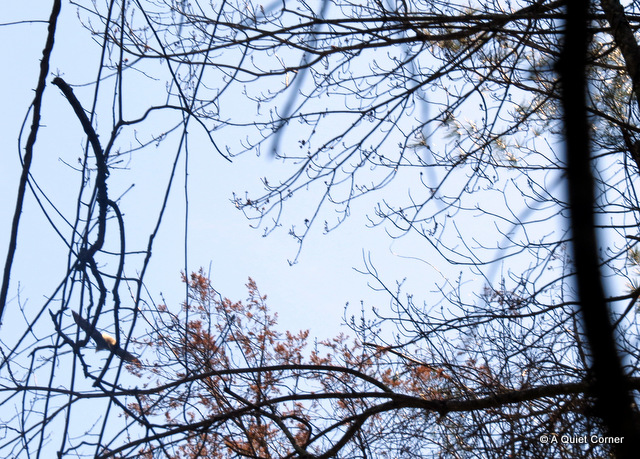 Every action causes a reaction that's what Newton's Law says.  The turkey and me falling off the folding stool PROVED that.

But after this experience, this is what I say.

Gayle said…
Literally laughed out loud at your expense. Probably because I could just see it happening to me :/
Humor aside, the combination of the turkey, hawk and eagles would be a dream come true for me.
May 4, 2016 at 7:15 AM

MadSnapper said…
i would love the getting buzzed but not the on the ground part. what a super way to start the day off.. i love the peace and quiet of daybreak and the bird calls.. you have a lot more birds than i do, but i still love it. hope you did not hurt your camera, OR yourself or the stool... poor scared turkey... i would be scared of a buzzing eagle myself...
May 4, 2016 at 9:04 AM

Susie said…
I love all the shots...you are so lucky. What a wonderful experience...seeing all those wild birds. Turkeys are making a come back around here. I want to see an eagle so badly. Blessings, xoxo, Susie
May 4, 2016 at 9:58 AM

FAB said…
The joys of birding. Buzzed, battered but presumably not bruised. Loved the sequence.
May 4, 2016 at 1:06 PM

NanaDiana said…
What great shots! I don't get into the woods at all anymore but we have nesting eagles close to our house so we see them all the time. We have LOTS of turkeys around here...enough to be nuisance worthy. lol Have a wonderful day- xo Diana
May 4, 2016 at 3:39 PM