It happened suddenly. There was no warning.
Perhaps it wasn't the smartest thing to do but it seemed to help. Wearing the back belt while I was outside working in the yard seemed to help. It gave me that little bit of extra support however, around 4:00, I decided to call it quits.

Calling the dogs to also come in, I turned to look at them as they headed toward the patio. Trotting along like she always does when called, Moon was first. That in itself was NOT normal. Copper is ALWAYS first...ALWAYS. So, I peeked around the corner of the house wondering where he was.

Back legs quivering, there he was...just barely standing. Hobbling, his front legs were working fine. It was his left rear leg that he wasn't putting any weight on. Since he has arthritis in his right hip, trying to rely on the strength in that leg was pathetic. Struggling to walk as he came down the hill, he couldn't even wag his tail!

And, I have to tell you...it was breaking my heart.

I just didn't know. Wondering what happened to him and walking over to him just to be next to him, repeating "Go easy, go easy, Old Man." Once we got in the house and near his bed, I picked up his leg to look at the pad. Nothing. Running my finger gently through his toes, I saw nothing. Refusing to eat, he settled in his bed almost immediately.

That was on a Tuesday. The Pres was working the polls so he got home late. That night was the worst. The poor thing could just about walk to go to the bathroom. So, needless to say, his struggle became my struggle. Although he would drink his water, he refused to eat.  The entire time he was hurting, Moon guarded him and watched over him like an angel.  When he hobbled outside, she went with him even though she didn't have to "go."

After 24 hours, he began to put weight on his foot and after 48 hrs, he was back to trotting around.

However, I still do not know WHAT HAPPENED.

Did he get stung?
Did he get bitten by a snake?
Did he step on something?

Oh, one more thing.
Every lawn needs ornaments.
These two are mine. Yes, the lawn ornaments are fine and
they are back right where they belong. 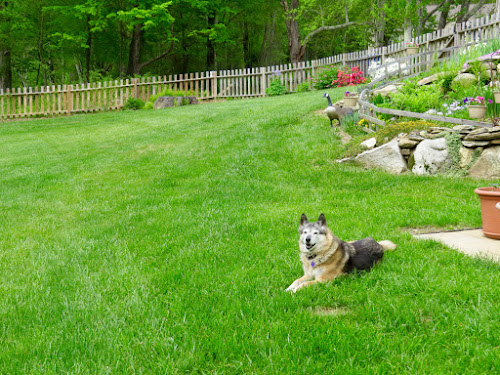 Breathtaking said…
Hello!:) Oh my goodness what a scare, and your poor dog in such pain. Arthitis can hit you like that though, and it seems that thankfully with a little rest off his leg,he's much better now. Lovely captures of your dogs on your impeccable lawn.:)
May 28, 2016 at 6:27 AM

Ann said…
That would be heartbreaking and scary. It's hard to see them in pain and they can't tell us what is wrong. Since he has arthritis in his hip, I'm wondering if maybe he was just running/jumping and maybe moved wrong. Glad he's better
May 28, 2016 at 6:47 AM

Beatrice P. Boyd said…
Sorry to read this about Copper, JP. Recently read a news story about how a tick had caused paralysis in a collie, who survived after said tick was found and removed. Hoping Copper and Moon don't capture any of these nasty critters.
May 28, 2016 at 8:37 AM

NanaDiana said…
I am so glad he is okay. It is always so scary to have an animal hurt and not know exactly what is happening to them. Sounds like a bite of some kind, doesn't it? Scary for you! Happy Memorial Day weekend to you. xo Diana
May 28, 2016 at 8:39 AM

MadSnapper said…
so happy he is ok. he must have done something to it. once about 2 years ago, jake did the similar thing, but we knew he pulled it. he had been jumping up in the palms in the corner, trying to reach a rat.. he seemed fine for a while, but then could barely walk for a couple of days and we think he sprained it. Cooper might have gotten caught and pulled himself loose or any of the things you mentioned. i am with you, they hurt I hurt.. glad it all ended well
May 28, 2016 at 9:37 AM

Susie said…
JP, Glad your dog is alright and being himself again. Love your lawn, no wonder the dogs want to lay around in the grass. Blessings for a peaceful weekend, xoxo, Susie
May 28, 2016 at 1:25 PM

Barb said…
What a scare! I think a bite would have swelled or he would have licked at the hurt spot. Maybe he strained a muscle or joint?
May 28, 2016 at 4:51 PM

~Kim at Golden Pines~ said…
I love your lawn-ornaments! But that's really crazy about what happened with Copper -- I wish I could offer up a suggestion, but your guess would be better than mine. I'm just glad that he's doing better, and I hope that continues!!
May 28, 2016 at 10:19 PM

eileeninmd said…
Hello, you do have a beautiful yard. I am so glad your Copper was Ok and I hope he stays that way. Both of your dogs are beautiful. Thanks for linking up and sharing your post! Happy Sunday, enjoy your new week ahead!
May 29, 2016 at 9:07 AM

Blondie's Journal said…
I'm so glad you had a good outcome. I was holding my breath.