On Sunday, 7/17/16, the Eagle chick was being extremely vocal. After listening to it's almost incessant crying from 6:38 am until 10:30 am, I got dressed and headed into the woods, knowing that my visits would soon be coming to an end.  This time I did not bring my folding stool as I knew my visit would be short.

Rather than remaining in my usual spot, I walked in closer to the edge of the clearing, which is on the opposite side from the cluster of pines where the nest is located. The cries were not coming from the nest but rather to the left of the nest.  But I couldn't find it.  Searching and scanning the trees, finally...there it was in a pine about 50 ft away from the nest...this year's fledgling.  It had apparently been making short flights from the nest to surrounding trees. 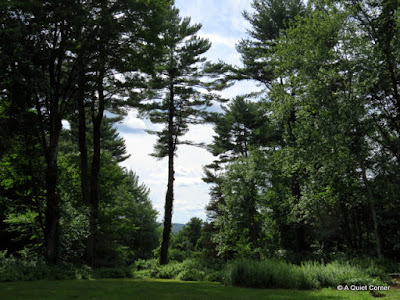 Meanwhile to my left, located in a pine along the ridge, sat one of the adults. I spotted it as soon as I arrived as it sat silently.

Focusing on the immature, I crouched a little lower to see if I could get a shot between the dangling and swaying leaves.

As I crouched, so did the immature. I raised my camera while it raised its wings right before it became air-born.   Not quite as smooth and graceful as an adult, it soared in my direction then veered left sailing right by the pine with the adult. Watching it soar over the forest below, it circled wide before returning to the tall pines on the South side of the nest where the adult was now waiting. 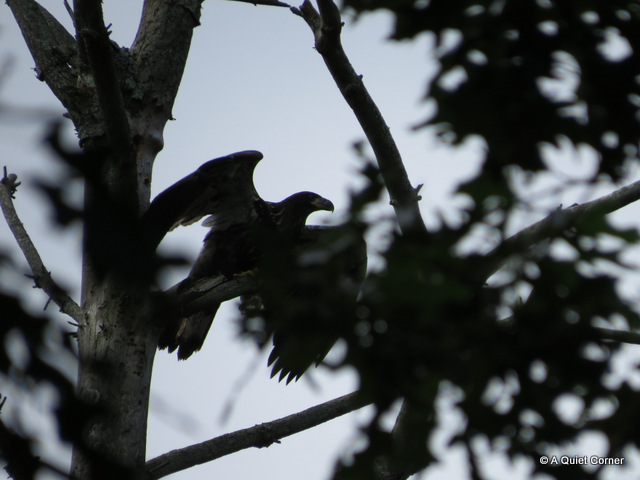 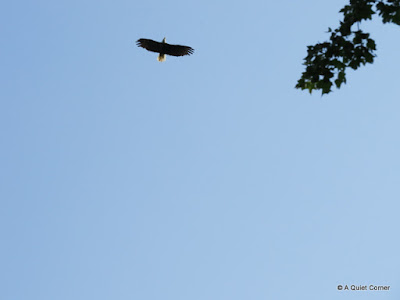 That was Sunday. And on the following Thursday, while working in the yard moving perennials in the 95 degree temps, I heard, once again excessive crying. Looking up and blocking the sun with my hand, I watched the immature soaring higher and higher...squawking the entire time...while the adult circled effortlessly below the immature.  Calmly the adult remained below the immature until they both re-entered the nest space.


So was it another flying lesson?  I thought so.  However, after telling a fellow Eagle follower, he thought it might be a hunting lesson.  Honing their flying and hunting skills is a must for survival.

Did you know that studies have shown that up to 72% of immatures die their first year of fledging (leaving the nest)?  Unfortunately most fledglings, like children, want to play rather than work.  It takes years for an immature to develop true, refined hunting skills.


Oh, one more thing.  Monday afternoon as I was walking up the gravel road from getting our mail and paper, the adult soared calmly overhead toward the nest.  The immature was showing off sailing and circling the treeline and our yard...squawking the entire time.  I have add here that of all fledglings over the past four years, she is the most vocal.
Email Post
Labels: Birds Eagles Friends Mother Nature Nature Summer Teamwork TLGV

Susie said…
JP, I so envy what you have been able to see . I would love that. It was sad to learn that so many fledglings never make it to adults. When I was at the zoo...the eagles can make one huge racket when it's feeding time. :) One day, I hope to see one in the wild. Blessings, xoxo, Susie
July 27, 2016 at 8:26 AM

genie said…
I hope she makes it, too.I enjoyed your photos. Eagles and their babes are such a great for the eyes when we are lucky to be able to zoom in on a nest. We had one which was way up high in a tree across the creek and on private land. As hard as the owners tried, people went around the other side of the creek, trespassed, and mom and dad moved their home to another place. I so hope they all made it. genie
July 27, 2016 at 7:25 PM

Bee Lady said…
We've been watching eagles across our pond. I love watching them. I haven't found their nest, but I think they have one somewhere over there because they've been there for the last several months. Thanks for sharing your stories about the eagles.