It's been a while since anyone has heard from me, tucked away in A Quiet Corner.
Did you miss me? I hope so because I missed YOU!

Here in CT, August was extremely hot and humid. Both baking and kayaking had to be put on hold. However, at the end of the month, according to the local weather forecast, much more tolerable weather was on the horizon so I began to get my hopes up and into September we went.

the Pres and I then became a tad preoccupied in the beginning of the September and continued to be "involved" over the next few weeks because:

a wall between two smaller bedrooms needed to be removed
resulting in repaired ceilings, walls and floors of the two rooms
removed a doorway
sheet-rocked, taped and compounded as necessary filling in the old doorway
built a new closet, framed it in, and hung the doors
moved the washer and dryer into their basement (finally....week 3)
Then, our friend, Luke (whose name is NOT really Luke...remember?) went up to help the Pres with all the plumbing because the Pres is not familiar with the new .....
re-plumbed the drain for the washer
put in the water shut-off that feeds the washer
put in the dryer vent through the basement patching the old vent with shingles removed for new vent
put in the electrical box and outlet for the dryer

This was all taking place at my daughter's new house in RI.

They bought a wonderful place near the bay and after they closed, made a list of things they wanted done BEFORE they move in. So, we thought we would give them a hand...:) 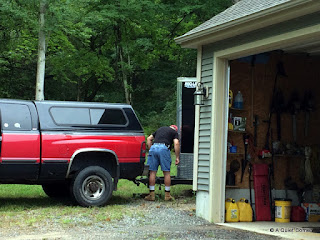 The day before he was scheduled to leave, there he was..."gathering" (as he put it)...the dolly, skids, moving blankets, plastic tarps, everything for moving.

Those things went in the trailer.  Then he placed the smaller things along with all his tools (including his table saw) in the old Dodge Diesel. The next step was to  carefully back up the weighted down truck to hook up the trailer.  With everything ready and loaded, he was ready to hit the road the next day. 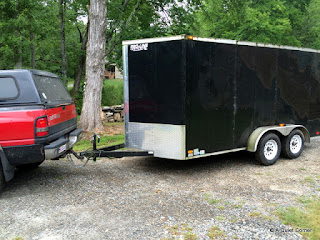 I honestly don't remember what time he got home the following day (the day they closed).

What I can tell you is this...while they wanted him to help move the washer and dryer down into the basement, the Pres, being an independent soul that he is, took down the wall they wanted removed instead, telling them "the washer and dryer could wait". The Pres is "the right guy" if you need something destroyed and re-built. He was ready to build!

And me...all I did the following day, it seemed, was pull weeds...for four hours.

Lawn bags filled with clippings and weeds were loaded up in the Pres' truck and brought back here...added to the burn pile.

Making my way around the house, one side at a time, I began to feel a sense of accomplishment after several days until I got to the North side of the house. There was this vine...thorny, thick entangled and smothering everything. I have to bring the pic ax with me next time, I thought.

So, for what it's worth, this is the only fence I have.

Not Busy Baking
(although I did manage to bake 6 loaves of zucchini bread, a cranberry nut bread, a batch of chocolate crunch brownies, babysit goats, resume Tai Chi classes, workout 3 times a week, babysit Mia, get called for Jury Duty, weed my gardens and care for Moon and Copper... to name a few...all of which you will hear about now that "they're in.")

Gayle said…
Well that explains that.
I haven't been real active either (bloggingly speaking) for a couple weeks but I did notice your absence.
'bloggingly' ??
October 6, 2016 at 6:20 AM

Karen Lakis said…
Whew! You've been busy! I laughed at the not busy baking part - you've done way more baking than I've done in the past several years! - zucchini bread - yum!
October 6, 2016 at 7:10 AM

eileeninmd said…
Hello, you have a very good reason for being absent. Congrats to your daughter on her new place. Sounds like a busy time with all the projects. Happy Thursday, enjoy your day!
October 6, 2016 at 9:06 AM

Susie said…
JP, I always say that remodeling a home test our love for each other. LOL. I had a friend that used to say more divorces were started on the boat ramps than anywhere else....I would say right behind that...if you are not made of tough stuff...it would be remodeling. LOL. If your Pres is like my Teddy, he will drag out every blame tool he owns to get the job done. Good job , you loving parents. Blessings to all of you, xoxo, Susie
October 6, 2016 at 9:17 AM

Prunella Pepperpot said…
You have indeed been very busy and yes I did miss your posts. Have a restful week :)
October 6, 2016 at 3:04 PM

Sylvia said…
JP, I was happy to finally see a new post. I have missed you. I'm glad all is well and everyone is up to their regular activities. Maybe kayaking in the fall. Mind September has slipped by so quickly. Sylvia D.
October 7, 2016 at 12:12 PM