Although it didn't "spring" across the yard or through the yard, it did how up the afternoon Spring arrived.  Once home from my hike, I changed and had just settled on the couch.  The Pres was on his cell phone talking to one of his sisters when suddenly he said, "Get your camera...quick...get a picture of it!"

Rushing over to see "it" I had no idea what I was looking for until I said, "What am I trying to find out there?"

"There...there it is.  It just went behind the briers."

Moving to another window, "it" soon exited the brush.  Now I knew what "it" was as "it" slinked along the trail I use to walk into the woods.  "It" was a beautiful, very healthy looking Bobcat (Lynx Rufus).

Guessing it was a male, based on it's size, I reported the sighting using iNaturalist.org, knowing that here in CT, bobcats are being tracked. As top predators, their numbers affect other species as well as competing predators.  The goal is to tag and collar 50 bobcats in order to monitor diet and habitat as well as their population.

Watching it disappear into the woods to our North, as a few crows badgered it by sounding their alert, I got dressed and headed into the woods to "back-track it."  It's prints were very visible in the snow and I decided then that I would always carry a small tape measure with me in the future (to get precise info on the dimensions of the paw prints and the length of it's stride).

After reviewing the pix I took of the prints in the snow, I did a little research about Bobcat tracks and found this at Wilderness College: 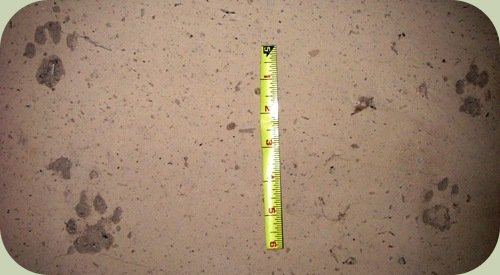 The above photo shows male bobcat footprints on the left and female tracks on the right. For both individuals the front foot is at the bottom and the hind is at the top of the screen. The photo clearly demonstrates some of the key morphological differences to look for in male versus female tracks. The characteristics to look for are:

Ann said…
Oh, how exciting that would be to spot one. I think I would be just a little scared to walk out there though for fear of it showing up while I was out
March 26, 2018 at 6:46 AM

Gayle said…
What a sighting. My preference is from a distance. Did you know there was one in your area before this?
March 26, 2018 at 7:41 AM

MadSnapper said…
this one is really big, and the hunters in my life back in the day, way back in the day, said they are the most dangerous of wild cats, so be careful out there
March 26, 2018 at 7:58 AM

Florida Farm Girl said…
Oh, you lucky girl! I had the opportunity to see one here at my house a few months ago and it was breathtaking. I got pictures but not as good as yours.
March 26, 2018 at 10:28 AM

only slightly confused said…
Thanks for those tracks. Now I now for sure it was not a bobcat hanging around the front of our house a while back (remember my tracks and photo in the snow?).
March 26, 2018 at 12:50 PM

Angie said…
I am so (jealous) happy for you! What a terrific sighting - that is a big one, isn't it!?! And so cool for you to go outside for the tracks and to do some follow-up research. I would be so encouraged to see one of these close to my house, but I am not sure everyone would feel the same ...
March 26, 2018 at 11:30 PM

eileeninmd said…
Hello, wow lucky you! I would love to see the Bobcat in the wild. Great sighting. Great photos, they are usually quick movers. Thank you for linking up and sharing your post. Have a happy day and week ahead.
March 27, 2018 at 7:08 AM

Rambling Woods said…
WOW and AMAZING and what a thrill to see that amazing cat...Michelle
April 1, 2018 at 9:34 PM