Telling my BFFs (referred to as Fred and Wilma to protect the innocent) that I had strained my back pulling a enormous clump of "finger grass" (digitaria sanguinalis aka crabgrass) out of my upper stone wall, Fred immediately got up and went into their garage.  Moments later, he stood in front of Wilma and myself with this thing and said "JP, watch.  I find that this is so helpful, making weeding much less stressful on your back.  You don't have to do any bending.  It does all the work."

Watching him carefully extract a sample weed from his lawn, I saw the simplicity of the tool and must admit I was amazed.  He suggested that I get one especially now that I'm getting older and am not quite as limber. 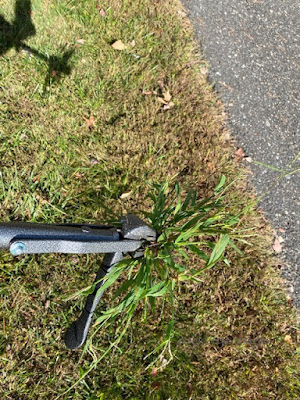 A few days later, when I backed out of my garage in the dark, I ran over something.  Apparently a delivery had been made and the driver placed the package in front of the garage!

Anyway, opening the carton, I removed my new butler.  After getting back home, I couldn't wait to get outside and try it.  Although it took me a few attempts the first few times, I finally got the mechanics down.

Now pulling weeds isn't pulling at all.  It is extracting!

Michelle said…
Thank you for sharing this and I think I might need one of these. So many weeds here :( Thanks for linking up and have a great week.
October 26, 2020 at 7:11 PM