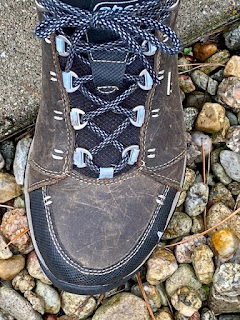 Six years ago, I received a letter inviting me to attend a four day, three night weekend of classes.  Each class was, in one way or another, geared toward wildlife and environmental conservation.  To this day I have no idea who recommended me, but I'm glad I went.

Sitting around a cozy campfire the first night, I sat on an old log next to people I didn't know.  There were about 30 people there from all walks of life.  Some were substantial land owners.  Some were stewards of conservation areas.  Some represented their town or community.  So as they went around the circle introducing themselves, I began to feel uncomfortable...as if I didn't belong...that I was not qualified to be there in their company.

Then before it was my turn to speak a woman sitting on the ground Indian style off to my right, leaned over and said, "Those are nice boots.  Are they new?"  I responded, "Thank you, yes."

Within minutes, she picked up some dirt and began to rub it on my boots.  Sitting there motionless I leaned down to her and asked "What are you doing?"  Smiling, she said, "There...now they look broken in."

When it was my turn to speak, I remember saying something like, "Hi, I'm JP and after listening to all of you, hearing your backgrounds and expertise, I'm wondering if I should be here at all.  We only own a little less than 3 acres, which consists of some wetlands and is primarily forest.  I monitor a Bald Eagle nest and send my findings to the state.  That's it.  That's all I do." 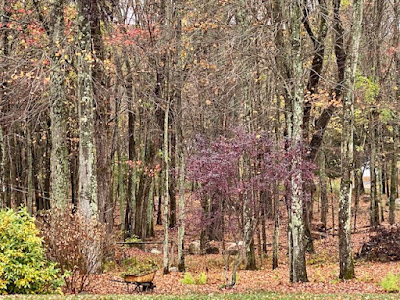 Yes, I stayed for the entire weekend and better still, I belonged there.  I represented the small land owner who would take home what I learned and put it to good use.

Last week I was thinking about her...the woman who put dirt on my boots...and texted her.  Asking her if she remembered me and my boots, I told her how the Pres and I had eradicated the Japanese barberry, and Oriental bittersweet along with several other invasive plants on our property.

Sending her these two pics, her response was "How could I forget you?  You are unforgettable!  You're a forest health hero, you amazing Eagle and Osprey watcher!"

Since I last saw her, she got her PhD and is working on her Doctorate...forestry, of course.

Ann said…
Whoever it was that recommended you for that weekend knew that it was right up your alley.
November 9, 2020 at 7:09 AM

~Lavender Dreamer~ said…
Oh I love this story. I stay in contact with one of the forest rangers that I met on a trail when I was hiking. And I always feel like I am not really an expert on anything but when she looks at my blog and writes to me, it encourages me. We all do that with our blogs! But rubbing dirt in your new boots? You handled it with grace! heehee!
November 9, 2020 at 3:28 PM

Ginny Hartzler said…
A once-in-a-lifetime event, and it just goes to show we should not give up some things if we have misgivings!
November 9, 2020 at 3:29 PM

Live each moment with love,

What a great story. It is good you are returning your land to a native environment. 3 acres is a lot to me, we only have a little over a half. Your photos are lovely. Take care, enjoy your day!
November 10, 2020 at 7:06 AM