During the nine years we've lived here, the Pres has replaced the transmission twice, done brake work, front end work and rear end work religiously and lately has been having problems with the "little things," although I don't consider the four wheel drive "little."  Just the other night he told me he's got to have his mechanic fix the four-wheel drive, fix/repair a vacuum leak, replace the head gasket and the real wheel cylinders and the headlights. Hmmmmmm....

Returning from the farm one evening he said, "I have to leave later tomorrow.  I could hardly see.  My headlights aren't working.  They blink on and off while I'm driving." 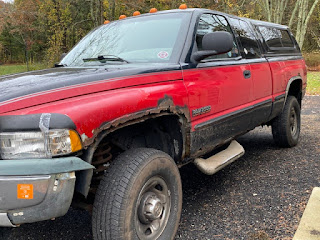 Just an aside here.  Our kids, the grandkids, and I have bugged him for years to get a new truck because we were afraid the rusting, rotting body would fall off while driving on the highway.

Hmmmm???  Later that day he was bent over under the hood for what seemed like forever.  Finally when he came in to eat, he told me he had finally got the signal light to work but the headlights were still a "no-go."

Back outside to continue he mechanical challenge before it got dark, when he came in the second time, he said, "I was able to put a screw in the switch and they seem to be working."  Off he went the next few days only to say a few days later, "I'm thinking about buying a truck."

Elated, I said, "Great when are we going?  Hon, if anyone deserves it, you do!"

Retiring the old, red and black Dodge diesel with it's almost completely missing dashboard, it will be given "classic" plates, and only be used for plowing the gravel road and driveways.  (Can you see how the headlight is held together with tape?  Well, the inside is held together with duck tape...I kid you not!)

Oh, one more thing.  The last week the well-used, old '98 red and black Dodge Diesel, with a mere 310K miles, left later for the farm.  When I asked him that night why, his answer was.."the screw stopped working so I couldn't see."

Fast forward through the online searches comparing various makes/models and the visits to dealerships, he just took delivery of his new ride...a 2020 Ford XLT which has the tow package he wanted among other extras. 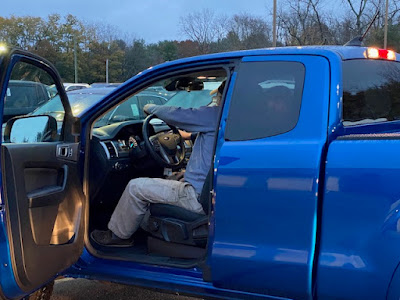 The next two days he spent all day out in the garage moving stuff from the Dodge into the Ford, installed a chrome tool box and bed liner.  And you know what?  The lights work!!
seeing, saying, and sharing...
Retiring
Our World Tuesday
Email Post
Labels: Connecticut Fall Family Road Trip Vehicles

Ginny Hartzler said…
Well, congrats on the new truck, it is about time!! It is real pretty, I love the color! Wonder if he will miss working on it?
November 3, 2020 at 4:14 PM

Florida Farm Girl said…
Good for the Pres! Isn't it amazing how fast they can work when you can finally get a decision out of them.
November 3, 2020 at 8:40 PM