Girls Will Be Girls

Watching the young females, I wondered where the boys were.  Wouldn't you? 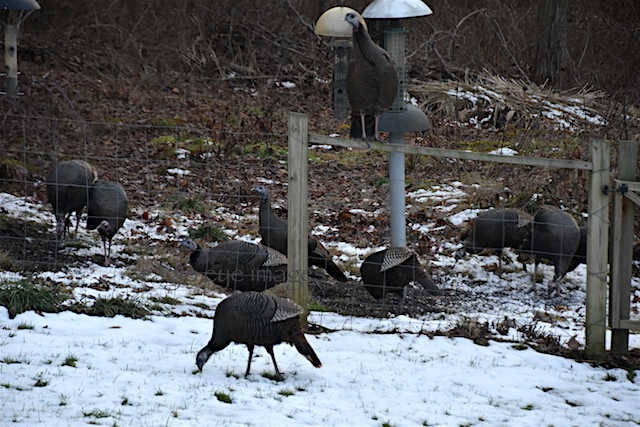 A few weeks ago, I showed you some photos of young jakes hanging around our feeders near the woods.  Today, you're seeing ONLY young females, better known as "jennys".  In the late Fall, jennys join a flock of mature female hens.

I found it interesting, like many other species, that the young don't hang around together.  Togetherness only happens during breeding season.

Girls Will Be Girls

David M. Gascoigne, said…
They have no idea how many of their cousins lost their lives this past week.
December 27, 2020 at 8:44 PM

MadSnapper said…
i knew a female donkey is a jenny but not turkeys. learning new things daily but the problem is by this time tomorrow I will have forgotten what i learned today.
December 28, 2020 at 5:12 AM

Crafty Green Poet said…
I knew of jenny wren but not jenny turkey. They look quite happy without the boys around!
December 30, 2020 at 10:26 AM

Beside a babbling brook... said…
Nature must have designed them this way, for a reason.