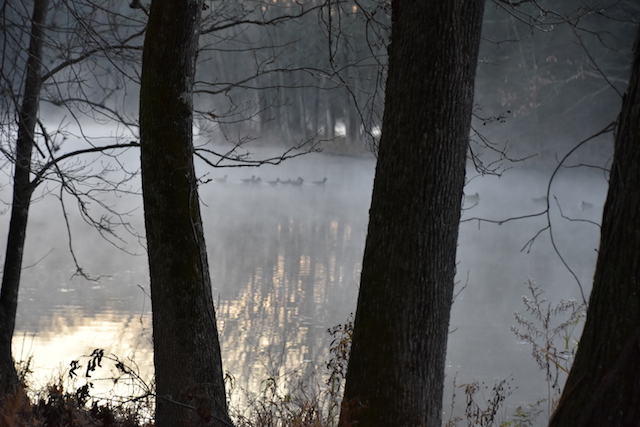 Landing in the river not far from me, the Canada geese began to slowly make their way upstream.  Their unplanned arrival was a surprise that morning, although observing them as they paddled was quite interesting.

In flight, a group is called a gaggle while on land a group can be referred to as a skein, wedge or team.  Did you know that:

-  when flying in that infamous "V" formation, when the one in front gets tired, it will drop to the rear and another will move in the leader position?

- as they travel each wing beat creates an  an uplift for the bird following, making it easier travel?

seeing, saying, and sharing...
Life Lessons
with you and
Wild Bird Wednesday
My Corner of the World
The Bird D'Pot
"We prosper when we share a common direction and sense of community.  We can get where we are going faster and better when we travel together and trust each other."
Email Post
Labels: Birds Connecticut Fall Health-Wellness Mother Nature Nature Road Trip Rural America Water Woods

kathyinozarks said…
Lovely photo. we really enjoy watching the geese and ducks here at the lake house. I did know that about their flights-pretty cool enjoy your day
December 2, 2020 at 9:09 AM

Florida Farm Girl said…
What a beautiful shot, JP! I knew about the alternating leadership but did not know about the lift created by those flying ahead but it certainly makes sense. Stay warm and safe,
December 2, 2020 at 11:01 AM

Ginny Hartzler said…
I did not know about the Skein and Wedge names. We have the Canada Geese all year round, for some reason. There are so many everywhere that they keep other birds from doing their thing.
December 2, 2020 at 3:51 PM

Ann said…
I didn't know any of that stuff. How odd that they are called one thing while flying and another while on the ground
December 2, 2020 at 7:12 PM

Beatrice P. Boyd said…
Most of this info on geese was new, except that I knew about a gaggle. The "reason" for them flying in a V formation was interesting to learn and NOW I know too.
December 2, 2020 at 8:25 PM

eileeninmd said…
Hello JP,
Great photo, it looks like it could have been taken here at our lake.
Thanks for sharing the info on the geese. I like the travel together quote. Take care, have a happy day!
December 3, 2020 at 3:41 PM

~Lavender Dreamer~ said…
How interesting...I didn't know that. We watched a flock of about 30 Sandhill Cranes fly in a V today. They were beautiful! We can always learn from nature.
December 3, 2020 at 8:03 PM

Veronica Lee said…
Other than gaggle, I didn't know about the other collective nouns for geese. How interesting!

Yvonne said…
There are many good life lessons from nature, after all, nature's been at it for some time :) Beautiful photo.
December 4, 2020 at 1:08 PM

betty-NZ said…
The things I learn! I know that humans could learn a lot about helping others from many of our feathered friends.