Walking in the GR to open the blinds, I noticed that one of the Christmas ornaments was on the floor.  Leaning down to pick it up, I cringed.  The red ribbon threaded through it was half missing...eaten by Katniss, I guessed. (I found it THANK GOODNESS the next day in her litter box.)

(just an aside here:  "Each year hundreds of animals are injured at Christmastime.  Eating tinsel or cords can kill a cat.  Fake snow, mistletoe, holly and poinsettias are ALL TOXIC to cats in some degree...sometimes deadly".  Believe it or not they now make edible ornaments for your pets.)   Now back to the story.

However, I could not find my oldest granddaughter...anywhere.  Three days passed and continuing to ask the Press if he'd seen her, he thought I was going nutty!  On day four, I noticed that another ornament was on the floor.  This time I had to reach under the tree.  Lying down on the floor, I reached under and picked up the Christmas ball.  It was when I was getting up off the floor that I spotted something in Katniss' cat cave.

Yes, there she was...my oldest granddaughter in the entrance of Kat's cave!

Now the girls hang on my lamp because there's no way I want to misplace any of them! 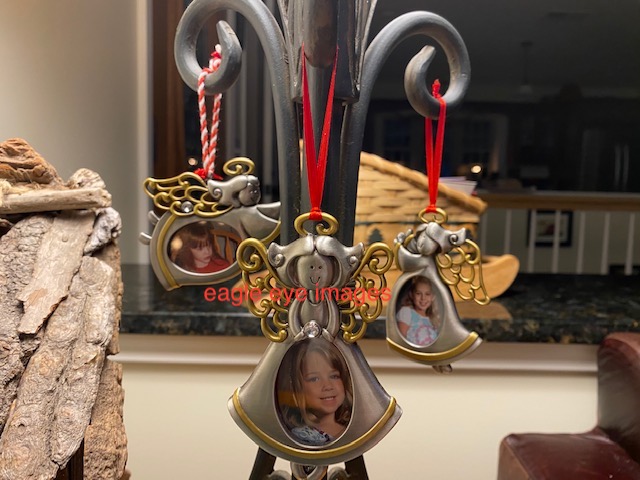 MadSnapper said…
i almost paniced when i saw your title and was so relieved after i read the story. it is a precious story and will be a precious memory. they are in a safe and perfect place. my friend Eunice, got a kitten on Christmas Eve, i took her to the shelter and made her get one. her cat of 21 years had died 2 weeks before and she was grievieng. Moses turned out to be her soul mate. he was such a bad cat. he stole everything she laid down, her watches and jewelry and placed them in his beds and boxes and thepaper bags he loved. the tree she had up the year we got him, was the last tree she ever had. Moses the destroyer did not like trees OR the wreathe I told her to hang on the wall. he got that too
December 22, 2020 at 8:38 AM

Rambling Woods said…
My two cats who are now 19 years old would do that and we stopped putting out anything that they might eat..One day Oliver broke into the pantry and ate dry pasta which caused a problem. He climbed all 3 shelves by his paws to get it using this extra toes to hang on.....I ask my sister who is a vet why they eat this stuff and she says dogs too and they might end up having surgery for it.....mystery...stay safe....Michelle
January 2, 2021 at 4:23 PM