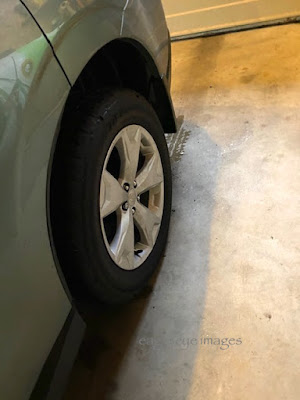 Although I have no "live" pix taken of what happened Thursday so you'll just have to listen/read.

It was the day my daughter was having surgery.  Telling her I would drive her, I hit the road in plenty of time, giving myself an extra hour to stop and look for Eagles.

When I pulled in to the road at the hatchery, three men stepped out putting their hands up for me to stop.  I could not go any further because tree work was being done.  Since I wasn't dressed for hiking through the woods, I declined and turned around near their parked trucks.  However, two of them had noticed the BESG (Bald Eagle Study Group) sticker and began asking questions.  We gabbed and they told me any time I wanted to come back down I would be welcome and to use their names if anyone stopped me.

It wasn't long before I was on the highway heading to RI.  I think it was as I was sailing through Providence that my "TPMS" (tire pressure monitor system) light appeared on the dash.  The last time it came on, I had called the Pres who told me not to worry, it was just due to the cold weather which impacts tire pressure.  Bear in mind that my ETA at my daughter's was 55 minutes.

By the time I got to my daughter's house, my rear tire was very soft so I told my daughter we had to hit a gas station ASAP.  We did just that.  But what was crazy was that when we put the pressure air gauge on the stem, it registered as having 7 pounds...7 flipping pounds...of air!!   It should have had 30...YIKES!

Filling that tire tire and checking all the others, we headed to the surgical center where we waited in the car until it was time for her to go in. "Mom, I know you were planning on doing some shopping while you're here, but I really think you should go straight home.  Don't stop anywhere and don't speed on the highway just in case that's a bad tire.  Mom, why didn't your tire pressure warning light reset itself?"

ME:  "Don't worry, I'll go right home and it will probably reset as I'm driving home.  Good luck and text me when you can.  I love you and thank you for helping me with the tires."

However, the warning light didn't go out.  I watched it the entire drive home (another hour) and decided that I would go straight to the tire shop near us rather than home.  When I pulled in and parked, and looked at that tire, it was like mush and I hoped I hadn't ruined the rim, although my car, an AWD Subaru Forester, didn't drive like anything serious was wrong.

Pulling my car into the second bay, four young, dark-haired, masked men approached my car and immediately began checking pressure and removing the bad tire.  No it wasn't a nail that caused the problem.  With a nail it would have been a slow leak.  What they extracted was a stainless cylindrical shaped tube about 2' long.  The inside diameter was larger than a ball point pen refill which allowed air to expel much faster!!

One more thing.  You may be asking yourself where was the President through all this.  I called him when I left RI and told him what had happened.  Then I told him I was going straight to the tire repair shop close to us.  Unruffled he said, "Well, I'm on my way to BJs."  As far as I'm concerned the whole experience was just "another stripe on the tiger."

Sandra said…
a true blessing it did not prevent you from deliving your daughter and getting safely to the tire shop... very odd to get that in a tire..
February 9, 2021 at 8:24 AM

Florida Farm Girl said…
I hate when those lights come on. You never know whether to ignore it or get it checked. Glad you got DD to her appointment safely and then on back home safely. Stay warm!
February 9, 2021 at 11:36 AM

Ginny Hartzler said…
Could anyone figureout what this thig was? Your car must be extremely good to ride so well when the tire was in such bad shape!
February 9, 2021 at 5:04 PM

Ann said…
Wow, glad you made it there and back without incident. My low air pressure light used to come on constantly. I had one tire that needed filled once a week. I took it to the guy who does my inspection and he cleaned up the rim and resealed it and I haven't had to have it filled since.
February 9, 2021 at 5:54 PM

My GBGV Life said…
Our tire pressure light came on the other night. Because we are having a big streak of below zero weather it happens, but it scares mom because you never know if it is just the cold, or a bad tire. Thankfully ours was just the cold, but we are glad you are safe and got your tire figured out. It is such a hassle when those things happen.
February 10, 2021 at 6:51 AM

NCSue said…
Oh I do SO hate it when anything auto-related goes awry. At least it was the tire flattening rather than a wreck or an expensive mechanical repair!
Thanks for sharing at https://image-in-ing.blogspot.com/2021/02/mmmmm.html
February 10, 2021 at 8:15 AM

Sandee said…
You're lucky that you didn't have more issues with that tire. I'm glad you accomplished your goal and got home safely.

Thank you for joining the Wordless Wednesday Blog Hop.