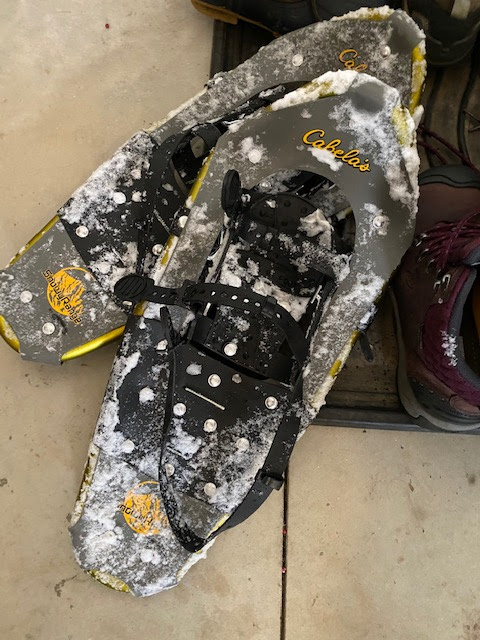 Saturday morning when I returned from the river, I noticed a lot of what looked like dog footprints on our front walk.  After I ate breakfast, I put on my snow shoes and decided to follow the tracks.  IF it was a dog, it had to be a large one because the width was about 3". The tracks began at the opened double gate so it must have come up the gravel road because I saw nothing coming from the woods. Whatever it was, it went completely around the yard as well as the house.  Walking closely to the house makes me think that it was a domestic animal rather than something wild.  Besides coyote prints are much smaller and there are no wolves around here.

I did, however, get to use the snowshoes which made me realize just how easy they make snow-trekking.  In fact, because it was so easy and so much fun, I threw them in the car and headed over to my friend's yard.  He laughed at me as I out them on and said, "You're walking like a penguin.  Do you have poles?"

"Yes, I have poles but I can't use them when I'm carrying my tripod and my camera!!

By the way, in case you didn't realize it, animals have a way of detecting inclement weather by things like barometric pressure.  It's true...I asked Google:

"Animals have been known to exhibit unusual behavior before a storm. This could be due to their keen sense of smell and hearing, along with sensitive instincts. Dogs may also sense the change in barometric pressure that comes with storms, causing them to bark, cuddle, or hide in an attempt to seek shelter."

Ann said…
Well that's interesting. Gibbs is not much of a cuddler but last night he laid on the couch with his head in my lap for quite a while
February 22, 2021 at 7:07 AM

Beside a babbling brook... said…
Interesting, that tracks were so close, to your house. I hope it was a friendly, domesticated creature.

Ginny Hartzler said…
Sounds like a fun adventure. Did you ever get any more clues about what the animal was?
February 22, 2021 at 1:10 PM

Anne (cornucopia) said…
I wonder where the dog came from. I do have coyotes roam through my yard, but I usually don't see them. But after one of the snow storms, I spotted tracks in my yard, looked at the paw print chart (that I found on the Internet) and determined it was a coyote track, not a dog track. I'm also glad to hear you got to use your snow shoes. I remember you mentioning those awhile ago.
February 25, 2021 at 2:19 PM