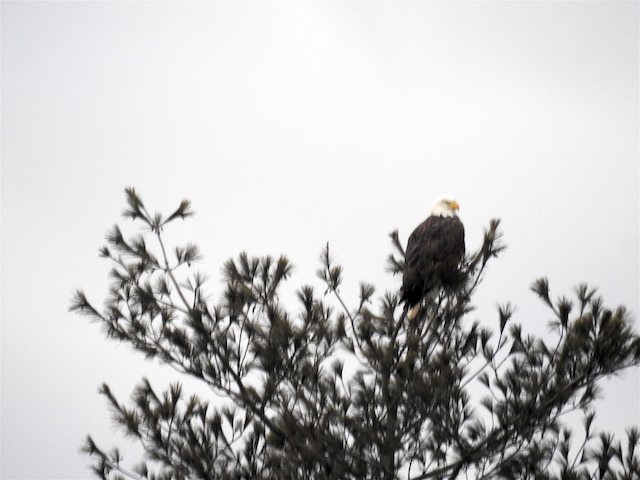 Although my nesting pair are not yet on eggs and were not, in fact, at the nest, I wanted to check for damage to the nest especially after the 40-50 mph winds we had last week.  I hung around for about 30 minutes picking up sticks for the owner of the property.  (Call me crazy but it's a thing I do out of appreciation.). Next stop...the Club.

Exiting my car where I usually park, I immediately felt something...something watching me.  Sure enough, an adult BE (male, based on size) was perched atop it's favorite pine near the small peninsula across from the cove.  While I picked up branches and placed them in the huge fire pit, it watched intently.  An hour later it headed NE, just like always.  Although moving almost constantly, my fingertips were getting cold so I hit the road and headed home for a hot breakfast.

After breakfast, I still needed to warm up so I decided to make up a batch of turkey patties.  When done with that and after cleaning up the kitchen, I figured I'd go fill the bird feeders.  Stepping out onto the deck just as a  Coopers hawk flew in attempting to get one of the perched doves for lunch, I watched it take cover in the hemlocks.  I hadn't even gone to the seed bin yet when something else caught my eye.

Soaring on the NE winds,  the adult Eagle circled over my yard, over the tree-line and the old nesting vicinity repeatedly.  It literally hovered on thermals over the ridge for minutes and I just couldn't help but wonder if was merely visiting the old neighborhood and being a little homesick.

The reason I say that is that the pair that nested here was productive for 5 years, until the supporting branches of the tree gave way, causing the 6' nest to collapse.  Speculating that they built elsewhere...somewhere between here and the river, I also believe that the pair I see at the Club are my old pair.  When they leave the river, the head NE (in the direction of my house).  The adults I'm seeing here at my house (only 500 yds from their nest) head in the direction of the Club.

The following morning I returned to the river.  Adding branches to the fire pit, the male suddenly appeared and just as I expected sat in it's favorite pine basking in the sun.  Chitter, chitter, bleak, bleak...the unmistakable call came from the taller pine on the tip of the peninsula.  Forty five minutes later it flew toward another huge pine and appeared as if it was "mounting" the very well concealed female.  Both headed NE departing one, followed by the other.

Copulation usually occurs either at or near the nest.  Sooner (I hope) or later, I will find this nest. 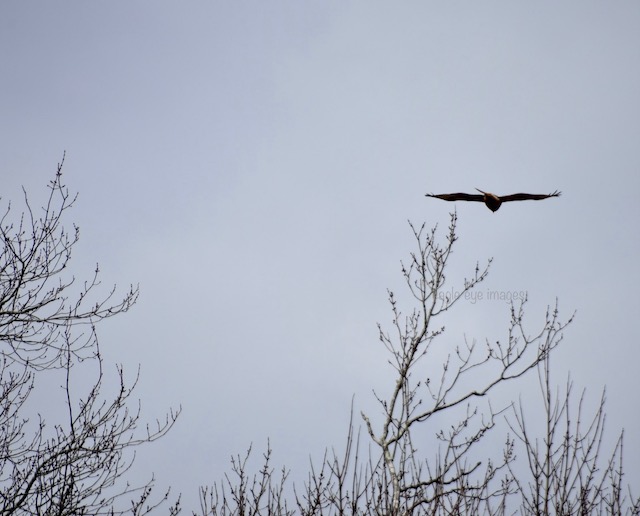 Inger said…
How wonderful it is to come here and read about the eagles. In all the years I've lived here, I've only seen one, and it wasn't a Bald Eagle. But still, I was very happy to have spotted it. Ravens are the predominant birds here, they are very territorial and chase away all other large birds. I see hawks at the beginning of the canyon, but rarely here.
March 9, 2021 at 10:41 AM

Anne (cornucopia) said…
Wow, it's fascinating that the BE seems to be hovering over the area, thinking about the old nest.
March 10, 2021 at 7:04 AM

Hootin' Anni said…
I am so envious!!! How awesome to be so near the eagles. Wonderful images & thanks so much for sharing this adventure with us at I'd Rather B Birdin'. (Sorry I'm late visiting)

Dave said…
Great to have these residents to keep you company. An impressive bird you are very lucky
March 14, 2021 at 3:02 PM