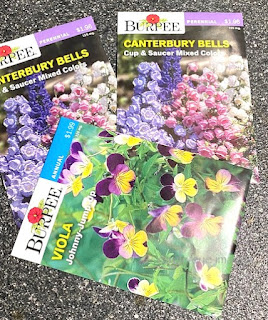 A while back, I showed you some seed packets that I bought to plant this Spring.  So, just to follow up on just how life rolls here....because believe it or not, I do do more things than observe Eagles and Osprey...here's an update.

When I showed the Pres what I'd picked up, he immediately said that he would bring me home a flat of potting soil mix from the farm.  The plan was to plant the seeds indoors and by the time it was time to plant the seeds, they'd be good to go.

As promised, one day he came in and told me my flat of potting mix was out in the garage and ready for me to plant the seeds.

They were so flipping tiny...like little black fleas in the palm of my hand and once I started the task, the Pres was right there giving directions.  Finally, I just caved and turned the task over to him.

Oh, trust me, he complained about them being so tiny too and when he was done, he said, "Now, we just have to place it in the sun and spritz them every day."

Katniss loves...LOVES, LOVES to dig in my houseplants which I have strategically placed for their protection and hers.

It wasn't too long before I suggested the Pres' bedroom since he leaves the bedroom door closed because Katniss is not allowed in there.  Once the Pres agreed, I said, 'And now, since they're in your room, you get to tend to them."  He didn't balk at the suggestion or even respond other than his usual "Uh, okay."  Setting the flat on our storage chest we received as a wedding gift, he spritzed daily and just told me, "I hope you have made a lot of room for these.  You know I planted both packets, right?" 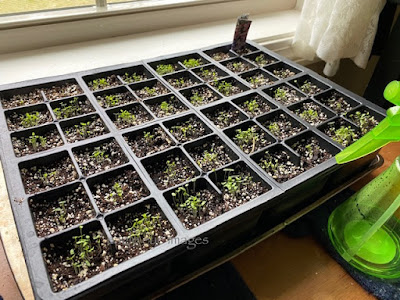 NCSue said…
We have started zinnias and milkweed inside this year to give them a head start, but the weather is still too unsettled to put any tender plants outside. I'm ready to see the END of cold weather, though!
Thanks so much for sharing at https://image-in-ing.blogspot.com/2021/03/help-please.html.
March 30, 2021 at 8:43 AM

Michelle said…
Looking forward to an update on these. I have been trying to get some gardening/weeding accomplished. I am ready for flowers and vegetables.
March 30, 2021 at 12:36 PM

Florida Farm Girl said…
Oh, I think you'll do okay. Once they get about 4 inches high I think you could separate them and plant them wherever. Not as easy as to just plop the whole plug into the ground but it can be done. At least you can separate each of the plugs into two or three pieces and be good good to go. Good luck.
March 30, 2021 at 1:10 PM