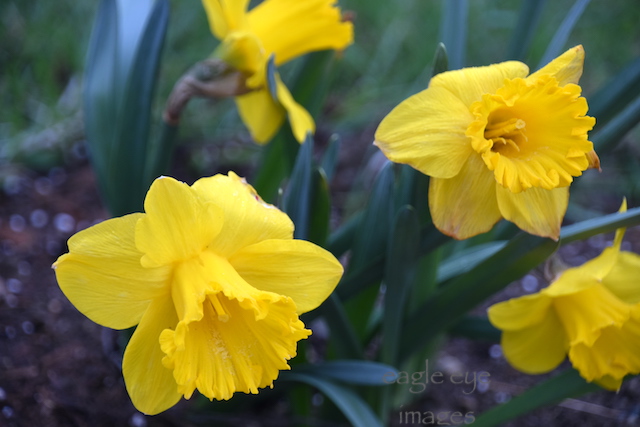 As you may already know WE HAD a NOR'EASTER roll through the other day....04/16/21 to be exact.  Well, the day before the conversation here at home went something like this...

ME:  Hon, do I need to worry about any of the plants we just put in?

(BTW, did I tell you one afternoon, the Pres brought me two beautiful pots of Daffs for planting?  After I planted them, pointing to the back of his pick-up, he said, "Do you want to do the rest now or tomorrow?"  That's when I saw the entire bed of his truck filled with flats of Tete-A-Tete...16 plants in a flat and I have no idea how many flats there were but what I will tell you is that they're going to be adorable!!  In addition to the miniature Daffs, he brought home 9 Easter Lilies...NINE!!)

HIM:  Well, I think you should cover the Easter lilies.  The Daffs will be fine.  They like the cold.  They just came out of the cooler.  For the lilies, se the five gallon buckets in my garage.  That'll work.

So, the morning of the 16th, in the rain, he left for MA and I headed to the garage where I found 6 five gallon buckets stacked on top of each other.  He often turns them upside down and sits on them so they were, shall we say, "well-seated".

However, for the life of me, I just couldn't pull them apart.  I banged, prodded, and poked with anything I could slip between them and nothing worked!!  Finally I searched Google.  A quick, easy solution according to a gentleman was to place them in a hot shower for a few minutes and "voila", they would be easily pulled apart.  And it worked!!

Well, yes, I was able to get some of them apart...all of them except the bottom two.  It was just beginning to snow so the timing was perfect.  Placing them over the Easter lilies, I was glad that we planted more than one lily together.  I had to improvise on my last plant and found a big lightweight plastic pot in the garage attic and set it on plant support so as not to crush the lilies and their tender buds.

Originally this post was supposed to be about my pair of Eagles and their devotion during the snowstorm.  However, I guess I was just as devoted as they were...both in planting and heading to the nest during the storm!! (Look closely at the photo...you'll see the yellow beak.). When I arrived at the nest, the visibility was so bad I wasn't sure a bird was even in the nest.  I could feel myself panic..until I spotted that touch of yellow-gold! 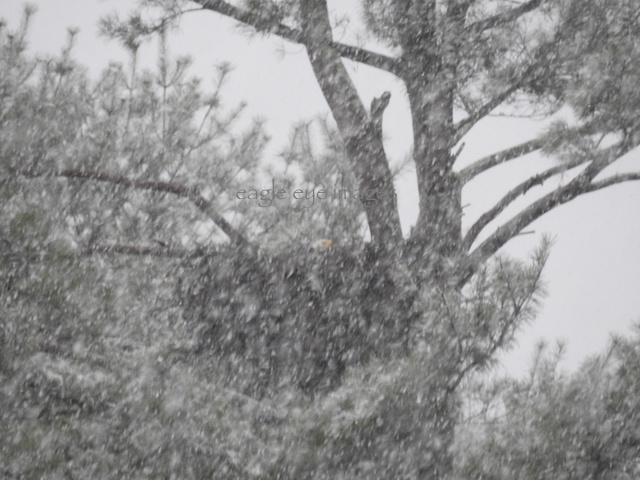 MadSnapper said…
today and the next two we have had thunderstorms with many flashes and booms, but nothing like yours. of course the storm picked the only day we have a vet appt for Beau iin about 20 minutes. at least it is not snow. glad you could save the plants and that once again interent solved your problem
April 19, 2021 at 9:13 AM

Ginny Hartzler said…
I'm glad the Eagles are still doing well. this was a great trick for the buckets. I am looking forward to seeing those new flowers, I have never heard of them.
April 19, 2021 at 2:21 PM