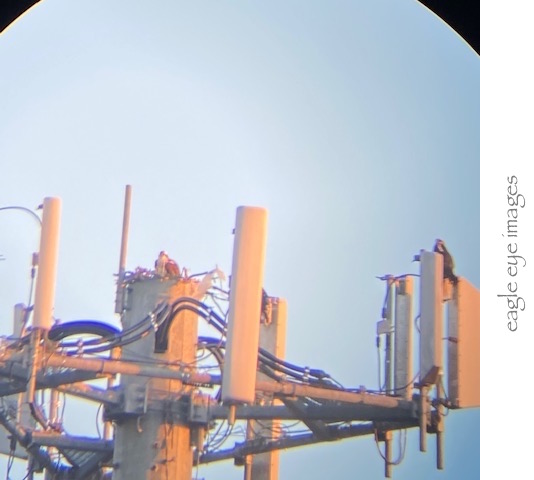 Less than ten days after the nesting pair arrived the drama began.  The female sat low and alone in the nest when I arrived at first light. Within minutes a crow flew in and sat in the nearby trees.  Cawing loudly, it wasn't long before the second one arrived.  Then came the third.  I knew what those crafty "corvids" were planning.

Before too long, they began annoying the female.  Diving repeatedly, they were relentless until she finally caved and pursued one as the other two flew to the nest.  The female Osprey was not about to let anything near that nest and so she flew back and sat as the three crows continued to badger her.  Once again, she gained lift and hovered over the nest, talons open and aimed at her enemies.  Successfully driving off the three intruders, there was no sign of her mate which troubled me.  Finally she was settled and was sitting quietly when I left.  I wondered if she'd eaten that morning since it is the male that feeds the female when she is on eggs.

The following morning, once again at first light, there she was sitting low.  Speculating that she was already on eggs, I wondered where her mate was.  About 20 minutes later coming in from the South was another Osprey.  Was it her mate?

NO!  It was the first of two to appear.  Talons barred an incoming Osprey literally attacked the bird in the nest but she stood her ground and fought back!!  Suddenly her mate appeared and began his agressive arial acrobatics and defense of his territory.  The incoming pair did not give up easily but the male was relentless. Finally they headed over the tree-line and up river.

As I watched, my heart pounded, and I kept saying "This is too much drama so early in the morning!"

(The photo shown was taken with my cell phone through my scope since the cell tower is approximately 265 yds away and nearly 200 hundred feet tall.  It was taken right after the male chased off the intruders.)

MadSnapper said…
not something i would want to see.. nature in its food chain doesn't sit well with me. i know its there but don't want to see it. i guess birds are like we are, have to live and fight to do it. always someone else wanting what we have
April 5, 2021 at 9:26 AM

Ginny Hartzler said…
Oh my gosh! This is better than any T.V. show! I know the crows wanted the eggs, but why would Ospreys attack the birds? I guess they wanted the eggs as well. Thankfully, this is a strong pair! I can't wait for the rest of this story.
April 5, 2021 at 1:55 PM

Anne (cornucopia) said…
I felt bad for the lone female. I'm glad her mate returned when the other ospreys were trying to attack. Ugh. But it sort of sums up what all life on this planet is about: survival of the fittest, including attacking one's own species to gain an advantage. It's sad, actually: the bullies triumph, and the weak perish.
April 6, 2021 at 12:54 PM