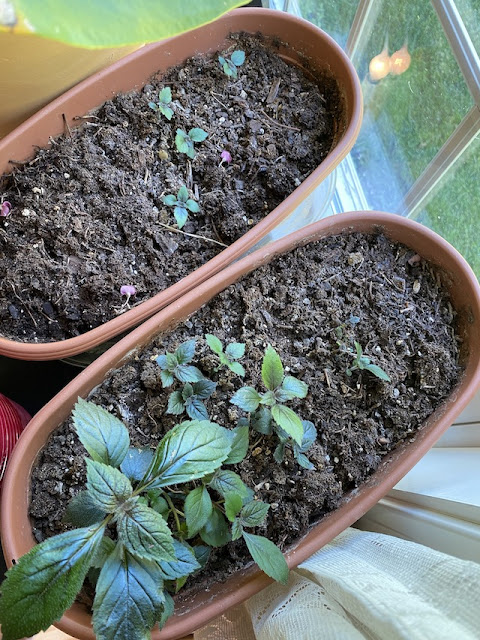 Actually this is really my fault,  although I'm blaming my actions on COVID.  Taking ALVA out fo the closet and her cardboard box, I thought, well, I know it's only March but maybe I can give her a jump start this year.
Not that I expect you to remember but normally, I take the houseplant (Alva) out of the closet after we return from vacation which is usually mid-April.  Stored in complete darkness beginning in October, the plant remains dormant until the following Spring

So, out she came VERY EARLY...way too early...and ever so carefully I removed the dead strands from the two potted plants. just like always.  Then giving her just a "little drink", I placed her in the East window just like I've been doing for the 10 years we've been here and the 8 1/2 we were in VA.

Hopefully, she will once again produce her beautiful flowers that last all Summer and well into the Fall.  Trust me, I will post pix when she blooms!!

You're probably thinking what in the world is an Alva????  Well, she has been with me since Joyce and Bill gave her to me when we lived in VA.  The story goes like this:

We were having a cookout...about 50 friends that I'd met the first two years we lived there.  When I retired and met more people, we decided to have a cookout.  When my friends Joyce and Bill arrived, they told me they had a gift for me.   Bringing me out to my front porch and handing me a potted plant that she called "Alva" I thought it was a very nice gesture.  Then she told me the story.

It was a piece of a plant she'd gotten from her "Aunt Alva", a woman who never married nor had children.  A lonely and rather homely woman, when Aunt Alva passed, Joyce's Mom I took the houseplant and cared for it tenderly over the years in honor of her sister.  The blooms on "Alva" (which I will show you later this year) are stunning.  It is one of the most beautiful houseplants I have ever had.  Each Fall she goes into a dark closet and stays in the dark until the following Spring.

To me, the beauty of this plant represents the soul of Aunt Alva and the kindness of my friends, Joyce and Bill.

My Corner of the World

MadSnapper said…
I am so glad my grandmother's name sake plant is now once again showing life. I have been following your Alpha 4 about 10 years and wondered if she was going to come out this year and as you know I named one of my plants Alva after my grandmother. Did you ever tell us what kind of plant Alva is
May 25, 2021 at 8:51 AM

betty-NZ said…
I do hope you tell us what kind of plant Alva is. I've never heard of putting one in the closet before.