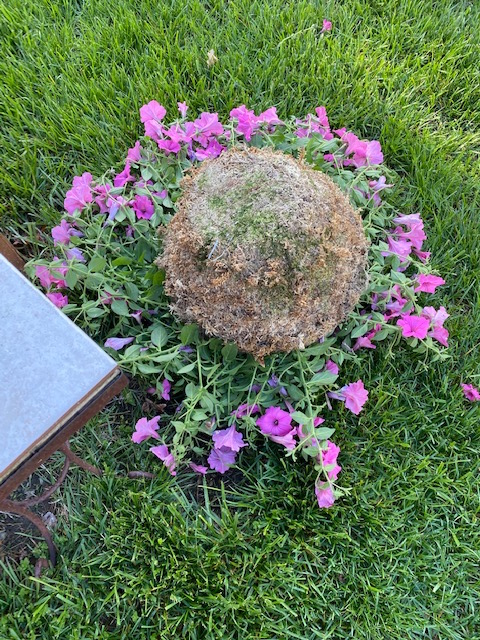 Every Spring I stop at a nearby nursery and reserve a hanging petunia.  This year when the nursery called and told me I could come down to pick it up, I was a little concerned.  We've had unusually chilly days and nights and I wondered if it would be too cold for it.  Placing it in the garage for safekeeping and until it warmed up, I put if in front of the window where it would at least get the sun it loves.

That night I asked the Pres if it would be alright outside or if I should leave it in the garage since the forecast called for high winds.  Assuring me it would be fine, he said, "Just put it under the pergola so it's not in the direct wind.  Leave it on one of the little tables.  It'll be fine."

The next day, when I walked around that side of the house and didn't see it, I wondered where it went.  The table was still in the same spot.  Well taking a few more steps, as you can see, I saw that the poor thing had been blown off the table....landing upside-down which totally crushed the top.

Well, I can now say it is hanging on the pulley getting the full sun it loves.

My Corner of the World

I wanted to show you what it looks like once it was hung on the pulley that the Pres hooked up for me. (Although he didn't mention it,  I think he actually felt bad that the plant was blown off the table...especially since it was brand new.). Glad he put in the pulley because it makes watering so much easier rather than using a step ladder!! 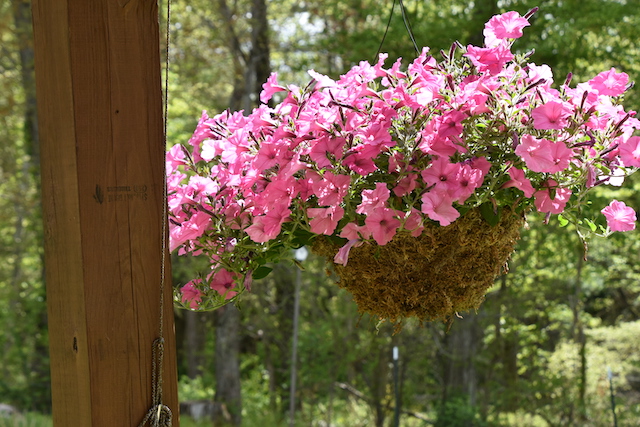 Ginny Hartzler said…
It's really pretty, and doesn't seem to be at all affected by such a horrible accident! Amazing!
May 12, 2021 at 5:10 PM

Florida Farm Girl said…
It's lovely. I bought some purples striped petunias this year. We'll see how they do. Those coir baskets are a bugger to keep watered even though they are supposedly lined with plastic.
May 13, 2021 at 11:14 AM

betty-NZ said…
It does look wonderful, even after its 'accident'! Most plants are tougher than we think they are and it looks recovered beautifully :)