Down With The Beetles 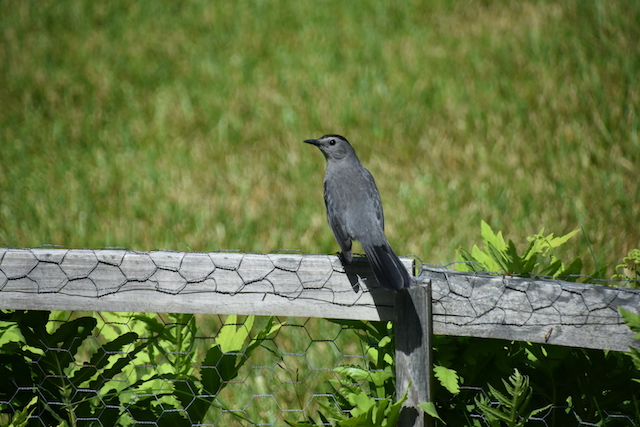 Landing on the old wooden fence surrounding my lower flower bed, I hoped that the Catbird was there for good reason.  There are numerous "ground birds" that help us gardeners out.  The Catbird is one. 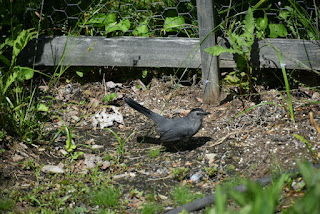 Landing in an opening at the front of the bed, he hopped over toward the not yet blooming Echinacea, a Summer favorite which has now spread to both the upper and lower bed.  Plucking a plump Japanese beetle from the foliage, he then took flight.  It happened quickly but I didn't care.  One less beetle is all good. 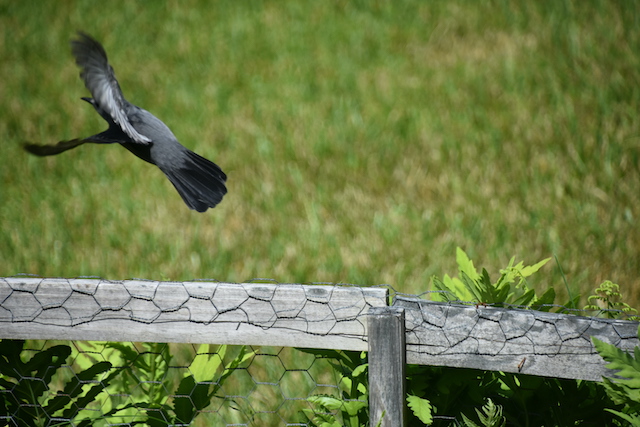 The day after I saw this happen I asked the Pres to come outside and help me with a few things that I couldn't manage on my own.  Walking by a cluster of ornamental grasses, he said, "Look.  I see four just right here.  I'll be right back.  I'm going to Home Depot to pick up bags, lures, and traps."
We put up five that day.
Then I told the Pres that there were several species of birds that eat Japanese Beetles...Robins, Cardinals, Catbirds, Purple Martins and Barn Swallows to name a few.
We've never seen Barn Swallows at our place although we are only 3/4 mile from the river where they love to hang out.  However, this year, for the first time in 10 years, I've been seeing Swallows every day.  I think Mother Nature sent them to help us fight the battle of beetles!
seeing, saying, sharing...
Down With The Beetles!
The Bird D'Pot
Wild Bird Wednesday
Email Post
Labels: Birds Connecticut Critters Family Gardening Home Mother Nature Nature Rural America Summer Yard Work

Phil Slade said…
I hope your Swallows stay around JP. Like you say, they keep the insects down. It's a shame that so many people don't appreciate the good that birds do in eating nasties. As I often tell folk, "We'd be knee deep in creepy crawlies but for insect eating birds"
June 30, 2021 at 4:22 AM

Ann said…
Hopefully the catbird will spread the word about the excellent beetle quisine at your place.
June 30, 2021 at 4:40 AM

Beatrice P. Boyd said…
Those beetles are a nasty bunch of critters and if the birds will help out, so much the better than having to use chemicals, but most likely you will need both to help in the battle, JP. BTW thanks fo much for your comment and compliment on the sand sculptures post. These were so amazing to see and we will be back next year for sure.
June 30, 2021 at 7:19 AM