Last week shortly after 6 am, the Bald Eagle that landed in the Cove and stayed for quite a while.  It was definitely NOT one of the adults I've been seeing frequent the Club property.  This bird has a lot more white on it other than the head and tail.  Known as "leucism" or being "leutistic" an older bird could have a lot of white in the wings.
Once the adult left the cove, I later found it perching in a pine used regularly by the other Eagles who frequent the area.  According to other Club members, it's become a regular.
Time to head home...7:15 am. 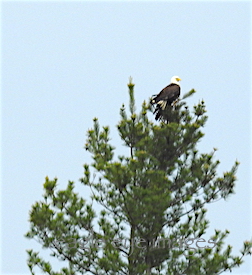 Ginny Hartzler said…
Wow, these are your best Bald Eagle photos yet! Looks like he may be looking for fish? So handsome!
June 2, 2021 at 12:00 PM

Inger said…
Every time I visit your blog I'm now expecting an eagle show. I've never seen eagles like this, and there you are living with them, practically. It's just so wonderful, thanks for sharing your visits with them.
June 2, 2021 at 4:33 PM