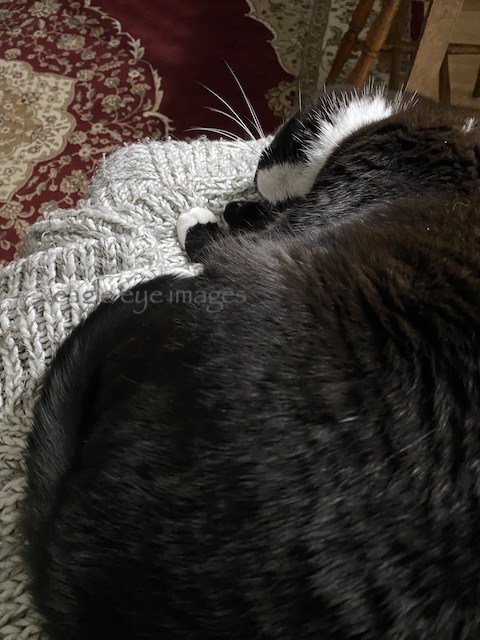 Wednesday night when I finally sat down to relax, Katniss was right there, waiting for me, which I didn't expect.  You see, the day began as always with me giving her a smooch on the nose and telling her I'd see her in a bit.  As promised, I came home from checking on the birds and as usual, she greeted me.
Fifteen minutes later, I made a shake, brushed my teeth and was soon saying I'll be back soon, heading to spend some time with my BFFs and "the girls" (their dogs) who I hadn't seen in forever.  I was anxious to get there.  As soon as I neared the house, I could tell the youngest girl had definitely changed yet more importantly, she remembered me!!   Rescued and adopted about 14 months ago, Willow's been going to training classes with my BFF to become a therapy dog.  And boy, has she changed! 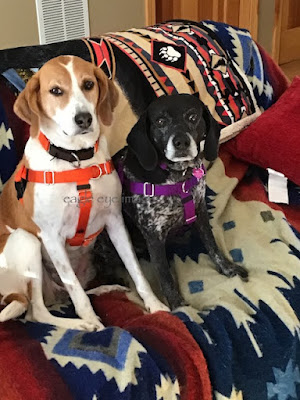 I fell for this dog right from day one.  Totally impressed by her behavior and overall demeanor, I watched intently as my friend dropped dog treats on the floor around her saying leave it and she never once attempted to pick one up!  She's happy, so well trained and VERY obedient.  My BFF has done a great job with her, instilling confidence and trust.
Willow, a 4 1/2 yr old American Foxhound mix, and Kiki, a German Short Haired Pointer/Beagle mix have become best  friends.  Kiki at almost 9 and the older of the two seems to think that Willow is her dog.  My friends were telling me that in obedience class, after Kiki is put through the paces, she immediately goes to Willow and my girlfriend rather than my girlfriend's husband....LOL.
After visiting for hours, and giving a few body massages, my departure was prompted by a call from my friend's widower.   After my friend passed away, I remained close to her husband mainly so I could check on him.   I know she would have wanted me to, so we usually touch base once a week. That day he wanted to know if I could come over and meet "a friend."
Once home, there I was, stuffing my face with a tuna sandwich and giving Katniss yet another I'll be back kiss on the nose, telling the Pres where I was off to. Once again I got in the car and headed out.
Walking through the open garage, through the inside door, I could clearly see his new "friend."  Asking if I could pick her up, and after getting his permission, once I did she wriggled and squealed with glee....this 10 week old Shih tzu, named Bella.  Staying to visit for about an hour, Bella bounced around, ran like there was no tomorrow, circling the dining room table and finally sprawled out on the hardwood floor. 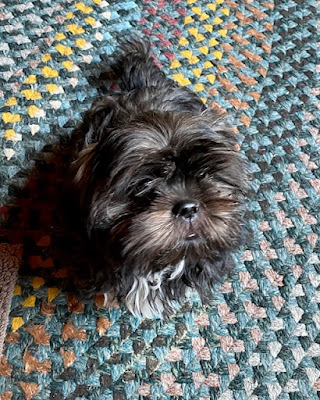 Visiting friends both two legged and four legged that day was fun yet I wondered how Katniss would react when I got home.
Honestly, after Katniss sniffed everything I was wearing, my face, hair and body, I thought she was going to be rather aloof for the remainder of the night.  I was wrong.
She curled up in my lap and went right to sleep.

eileeninmd said…
Hello JP,
I wanted to stop back and say thank you for linking up and sharing your post. I do love the kitties but the dogs will always be my favorite. Bella, Willow and Kiki are all sweeties. I appreciate the comment too. Take care, enjoy your day and week ahead.
July 27, 2021 at 2:00 PM