The two juveniles at the cell tower are loving life over the past few days as they will soon be flying.  Seen above is "mom" (on the far right) with her two "sibs".  More than likely the male was out fishing for the "family" as he was not around when this was taken.

A few days later, the two juveniles were in the nest crying loudly for food as the female sat on a lower level of the tower, waiting for the male to bring in breakfast. 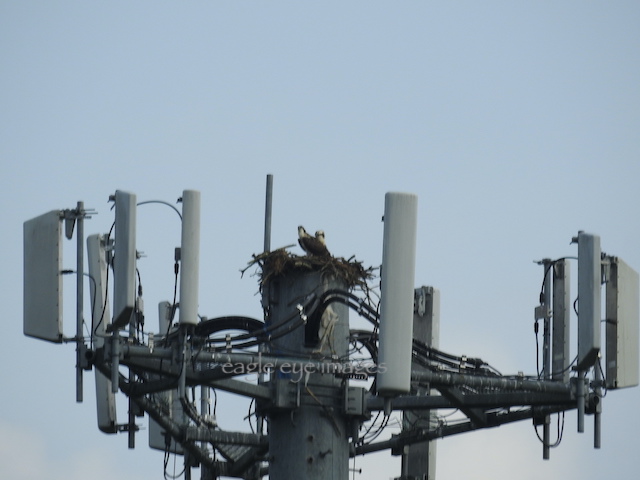 Meanwhile at the other Osprey nest, the same routine is also going on.

Although the behaviors are similar, their environment is completely different.  The difference is that one nest is on top of a light post rather than a cell tower.  Light poles at public parks are approximately 20' tall and there are other light posts nearby making for a short, unobstructed flight.

On the other hand, since the cell tower is about 200' up, the juveniles have to not only fly a longer distance to reach the nearby trees but also have to land safely in the trees.

While it may seem simple to us, to them flapping their wings and maneuvering is a challenge when they are only 55 days old!! 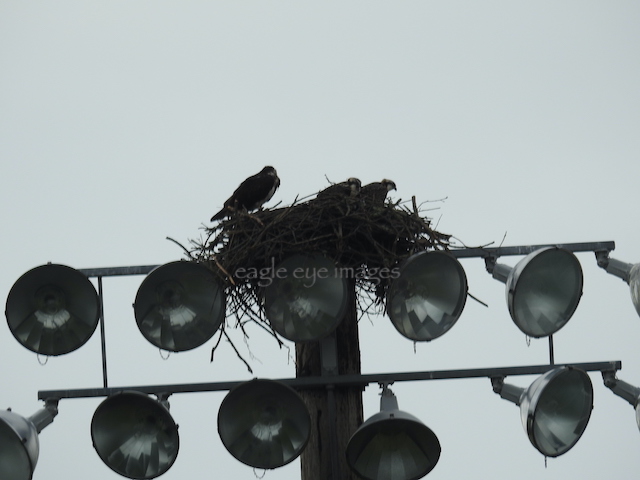 Just an afterthought...I would love to see an adult teach a fledgling how to fish.

Inger said…
Thanks for clarifying the distances, that's quite a difference. And how great that you are living close by so you can watch these beautiful birds.
July 19, 2021 at 9:38 AM

Ginny Hartzler said…
You got wonderful shots! I love the pretty blue cables in contrast with the birds. And the wires and cables also tell a story of nature existing with technology.
July 19, 2021 at 2:36 PM

Beatrice P. Boyd said…
It's amazing to see where these two bird families are being raised and not in the usual places like tall trees.
July 19, 2021 at 6:55 PM

eileeninmd said…
It is interesting to see the Ospreys and their nest.
The young ones will learn to fish quickly, I hope.
Take care, have a happy day!
July 20, 2021 at 7:13 AM

Hootin' Anni said…
Don't you just love this time of year when new lives begin to show signs of exploration and survival learning. The parents, so set on teaching, and nurturing!?

Excellent series and educational for us all!! Thanks for sharing with us at IRBB this week
July 20, 2021 at 9:05 AM