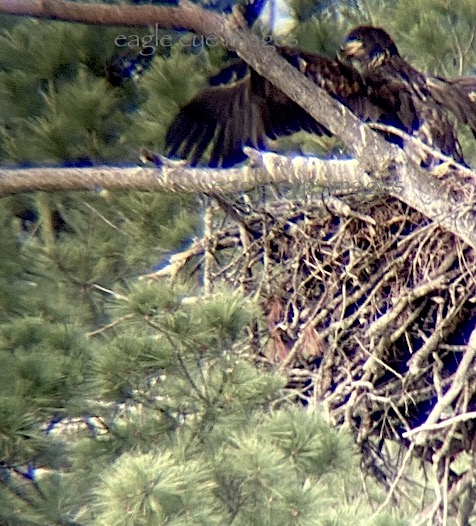 On 07/01 and 07/02, the chick at my nest continued to exhibit signs of "branching" (pre-fledging behaviors where the bird becomes acclimated to their ability to flap their wings, gain elevation and hop from place to place, let alone become accustomed to their amazing eyesight).  This behavior continues several weeks prior to taking it's first flight (aka fledging) until it no longer has a need for the hopping/touching down.  The first flights are only a short distance from the nesting tree (50'-75') .  Maneuvering among tree limbs comes with much practice and perseverance.  "Learning isn't easy" a good friend recently told me.

Well, on Saturday 07/03 when I went to my nest, the chick was not in the nest or on any adjacent branches.  It was just GONE.  Bear in my mind that based on the hatch date plus 77 days is how we determine the fledge date so when I saw that is was gone, it certainly was possible that it fledged.  Yet something in my gut told me something wasn't right, because...

While there, I had the chance to observe the adult male's behavior.  First at the nest eating breakfast, followed by cleaning itself afterwards, and then perching an adjacent branch.  Taking a repeated shots, I continued to watch the adult's behavior, and, after several hours, I moved on to my next nest.

Yet that night when I got home and viewed all the photos form the day, something just wasn't right.  The more I reviewed the behavior of the adult male, the more I felt something wasn't right based on it's behaviors.  Something was definitely wrong and now, for my personal satisfaction, I needed proof that the chick fledged successfully. 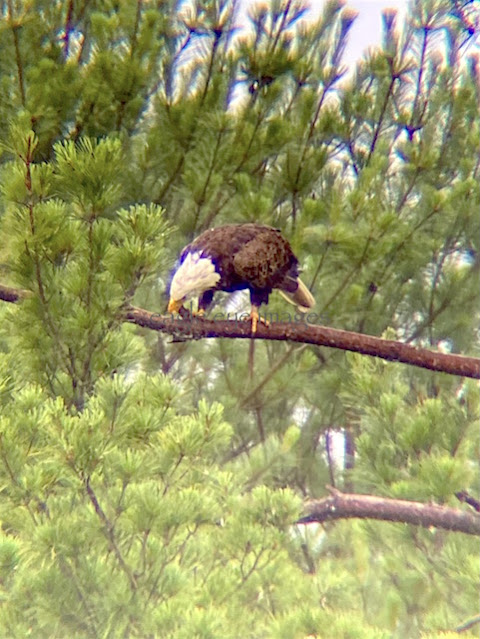 I immediately notified those who needed to know.  Then for reassurance, I called a friend of mine who owns and operates a raptor rehabilitation organization.  She told me of signs to look for in an injured bird.  Telling her that the chick appeared bright, alert, flapping it's wings and that I had seen it hop were all good signs that it was not injured in the fall.

Observing it for the next three hours, I headed home to eat breakfast and "use the facilities" returning one hour later, only to see that the chick was gone.  It was nowhere to be seen.  The next five hours were killers.  I never saw or heard it again on the 4th or the 5th.

Back in again on the 6th, when the adult female flew in to the nest, perched and called loudly, I watched her every move.  She also looked downward, focusing in the thick pine boughs but at a higher elevation than where I last saw the fledgling.  On July 7th, I saw and heard nothing however  on the 8th, I was elated to hear the cry of a chick a few times minutes apart...no longer at the nesting tree.  The cries came from the dense deciduous trees East of the nesting tree.  No, I couldn't see it and yes, I returned knowing the fledgling sounded good.  I still need to see it, although seeing the adults is a great sign.  They will continue to feed it until it ventures out on it's own. Yes, learning is never easy.

Ginny Hartzler said…
Oh my, what a drama! I am glad the chick is well, and nothing awful happened to it. And it is stll being cared for by the parents. Good detective work!
July 12, 2021 at 1:03 AM

Hootin' Anni said…
What an amazing saga...gut wrenching & nerve wracking too. May the chick survive to see another day...for years to come.

Fun60 said…
I could feel your anxiety from here. Thank you for your continued efforts to follow the fledgeling nd not leave us on a cliff edge wondering what had happened.
July 13, 2021 at 1:34 AM

You are so dedicated and determined. Which is a good thing.
I am so glad the Eaglet doing was ok.
Thank you for linking up and sharing your post.
Have a happy day and a great week ahead.
July 13, 2021 at 6:08 AM