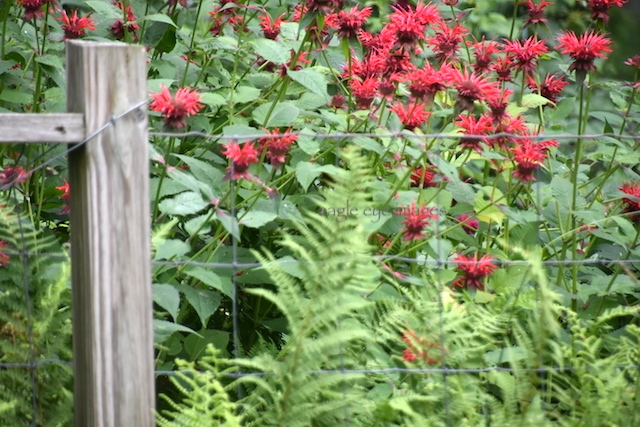 Katniss was sprawled out in her crate and I was sitting in the chair next to her.  I had brought my camera outside but because of the high humidity, it was taking forever for the lens to defog.   Although I brought the book I'm reading (Miracle of the Talking Stick by Felix F. Giordano) with me, I found that I was distracted by everything alive outside. 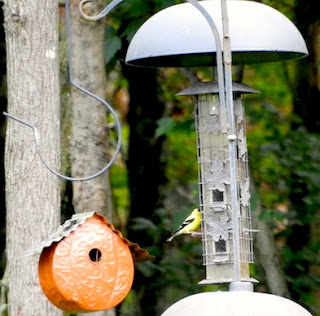 First, it was the vibrant patch of Bee Balm that sprouted up from last year's clippings thrown in a pile.  The Hummingbirds were zipping in and out.  Of course, I couldn't get one because sometimes I just find watching better than hitting the shutter, believe it or not.

Hoping to get a shot or two IF any birds showed up at our feeders, I waited.  We had just put up two of the feeders the day before after me getting notified to exercise caution but that feeders could go back up.  We put out one birdbath which was sorrily missed by all species but especially by the Eastern Bluebirds.

Then, watching one of the best pollinators bounce from bloom,  the fritillary butterfly fly finally settled. I wondered if I'd have a chance to get a shot.  Finally... 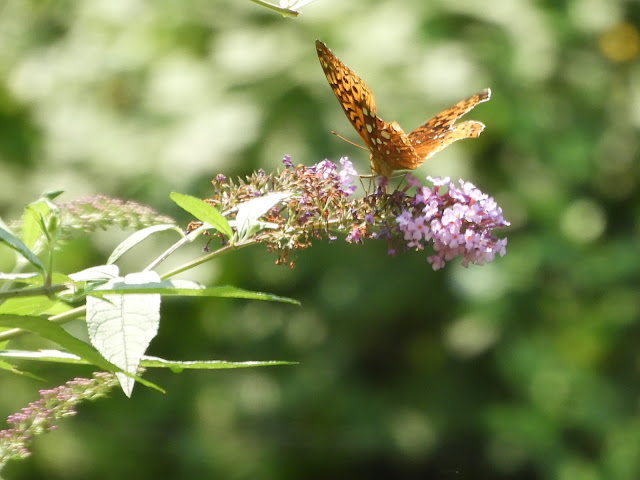 eileeninmd said…
Hello,
The bee balm is pretty, a great plant for the hummers. Cute Goldinch and pretty butterfly, my feeders are still down. Take care, have a happy new week!
August 30, 2021 at 7:57 AM

kathyinozarks said…
I love your bee balm, I bought a few plants-they were small-and sadly I have lost half out of 6 plants now It's been so hot here--loved your photos
August 30, 2021 at 8:45 AM

Ginny Hartzler said…
Your butterfly shot is beautiful! And I see the Goldfinch, too. I do agree that we can look into the lens so much trying to get photos, that we miss watching the entire thing live.
August 30, 2021 at 12:38 PM

Florida Farm Girl said…
Seeing the event for real is always better than a picture. Love the bee balm.
August 30, 2021 at 4:30 PM