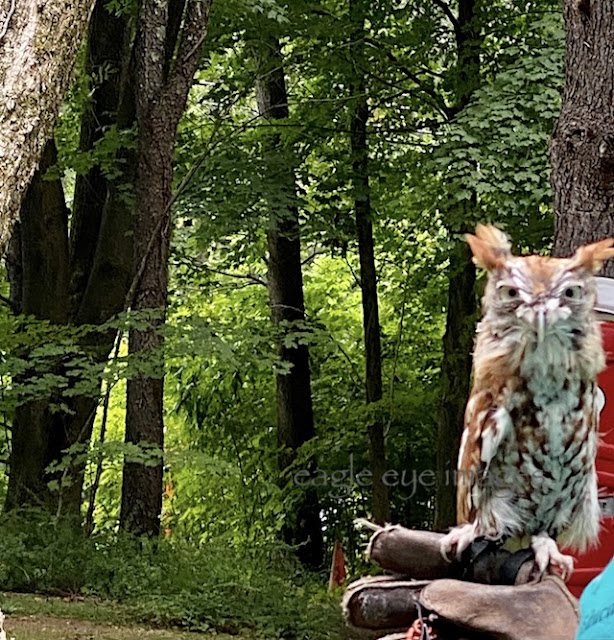 Meet Oakley, a screech owl who unfortunately was "imprinted" as a youngster and consequently thinks that humans are her best friend.  Captured by a family Oakley and her siblings were brought up by humans, fed by humans, etc. until they realized they didn't want them.  She will never be released into the wild.  As Lori stood with Oakley sitting on her gloved arm, I knew it was going to be another great day.

When Boss asked me if I could do him a favor and work the 14th, I didn't hesitate.  After I said "yes" he told me I would be helping out with a presentation at Horizon Wings, sponsored by The Last Green Valley (the organization I volunteer for).  Although I've been to the raptor rehabilitation's property and grounds many times, I always love going there.  Besides, after the Vice President spoke about Owls, she and her co-workers took us on a tour showing us each and every bird they have.

After "meeting" all the birds and learning some of their traits and characteristics, we were invited to watch the release of a recently rehabilitated young Red-tail Hawk.  Following in tandem we drove to the dense Yale Forest, pulled over and began to gather near an opening leading deeper into the forest.

Getting out of my car, I saw the VP approaching.  She smiled and said, "JP, would you do the honors today?"

"Would you like to release our bird and set him free?"

"Jeanne, I think I'm going to cry.  Look, I have goosebumps."

Following her over to the back of their SUV, I watched her gently take the boxed bird out of the car. "We're going to have JP release today."  Seeing the smiles on the faces of Kathy and Lori made me swell with pride as I turned to follow Jeanne.

Placing the cardboard box on the ground, she peered in to see in what direction the bird was facing hoping that once the carton was opened it would head into the forest.  Showing me what I then had to do, I then heard, "Whenever you're ready, JP."  Kneeling on the ground I pulled back the last set of tabs and placed my hands over the center handles.  Pulling them apart, I immediately saw the pale yellow/golden eyes peering up at me.  Without hesitation, I said, "Oh sweetheart...you're home."

Within seconds the young red-tail was out of the box, landing on a pine branch about 100 yds away.  It tuned to look back, then sat momentarily before lifting it's shoulders and unfolding it's wings, heading deeper into the forest.

Ginny Hartzler said…
Oh my, you have brought tears to me eyes! and your writing is beautiful. This owl is awesome, and look at the beak! we are birdwatchers, so I love this! What is your job??? Do you work with wildlife or other animals? We watch ALL the nature, animal, and vet shows on T.V., and go birdwatchng regularly. Yesterday we found a Night Heron.
August 18, 2021 at 10:56 AM

Brian said…
Oh my goodness, that is one of the best stories ever, really, that's so amazing!!! Thanks for joining our Thankful Thursday Blog Hop!
August 18, 2021 at 4:04 PM

Lea said…
Oakley is beautiful! I hope she will always have someone to take care of her.
Wonderful story of the Hawk release!
Have a great weekend!
August 20, 2021 at 11:10 AM

Michelle said…
How wonderful that you were able to set the hawk free. Oakley is beautiful, but a bit of a sad tale. Sometimes humans interfere too much. Thanks for linking up and have a great week.
August 23, 2021 at 12:41 PM