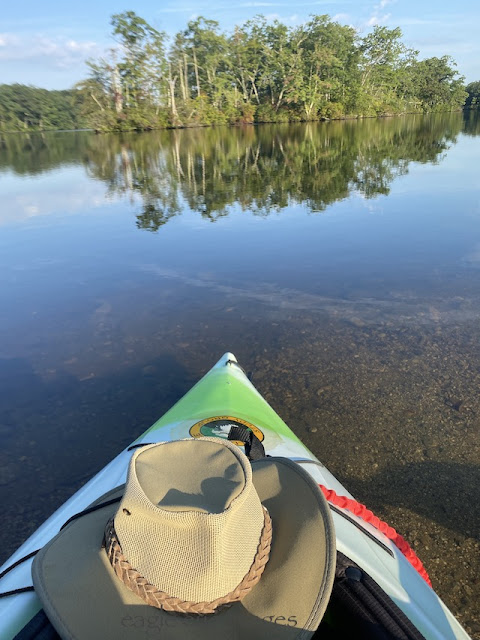 Loading the kayak and all my gear in the car the night before made heading out easy.  The Pres was still sleeping when I left.  Putting in was a bit unsettling but I managed to make it down the rather steep gravel pulling the kayak behind me.  Stepping into the kayak, I wondered IF I would be able to pull the kayak up the hill once I finished paddling. 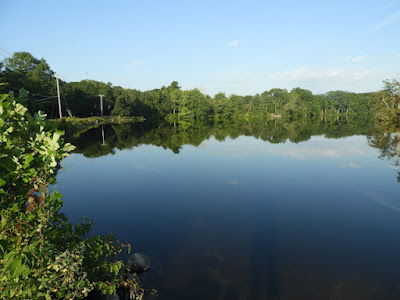 The 250-acre "pond" has seven islands, two of which had homes on them, from what I could see.  It must be interesting to have an "island" as a Summer place, don't you think?

Caught off guard by how much the wind had picked up since I left home, it was relatively easy paddling since it was against my back.  Following the Eastern shore as I paddled, I realized that there were only two other paddlers this early.

Fish were jumping everywhere...big ones I'd say based on the splashes they made. 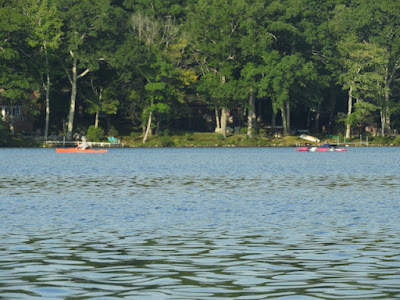 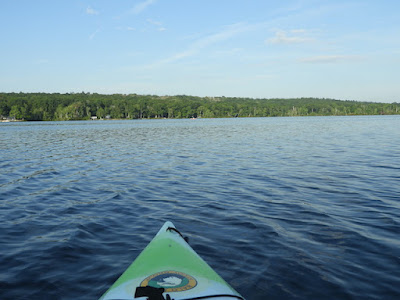 Quite honestly I was a little disappointed when I saw the number of homes along the South shoreline.  All one after another with their docks, boats, and ski-doos was enough to make me decide to head in the opposite direction.
After I'd had enough, I headed in.  But paddling back was a lot more work since the wind was no longer in my favor.  As silly as it sounds, when I'm kayaking, I find that counting my strokes makes the journey quicker and easier for some reason.  So I counted strokes (1,435) and it wasn't long before I could see my car in the distance.
As I approached the launch area, two men were just settling in their boat to fish.  After saying "Good morning," I told them to head straight out because "whatever it was that was jumping was huge!"
The gentleman in the back of the boat said, "at this hour they all jump for the bugs...especially mosquitos.  And I don't know about you but we don't like mosquitos!"
Ahhhh...lesson learned...that's why the fish were jumping so early. 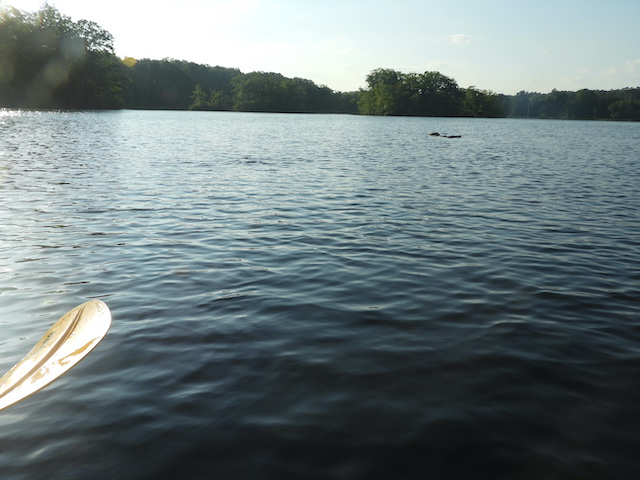 Ann said…
That would be kind of cool to have an island all to yourself.
I wouldn't have known that the fish were jumping for their breakfast.
September 14, 2021 at 6:34 PM

Joanne said…
I love early morning kayak rides! But I do find that for some reason the wind always seems to be working against me on the way home.
September 15, 2021 at 4:19 PM

betty-NZ said…
The things we learn! I never thought about why fish would jump.